Dominguez ‘a rock’ for Razorbacks 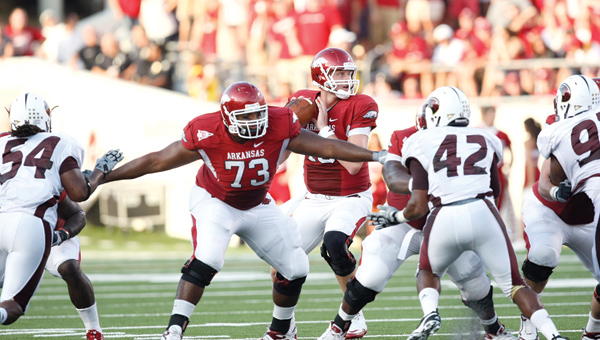 Ray Dominguez has been a rock on the offensive line with 26 straight starts going back to the 2008 season.

The senior strongside tackle from Bainbridge, Ga., has been a model of consistency on an offense that has been putting up big numbers all season. With so many consecutive starts on Petrino’s high flying offense, one may wonder what it takes to find your name on top of the depth chart game after game. 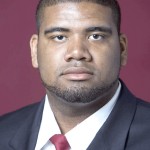 According to Dominguez, the answer is simple.

“To start that many games in a row it takes consistency on the field,” Dominguez said. “I’ve learned how to be consistent from following guys like DeMarcus (Love). I look at him for guidance all the time.”

There is no doubt that Dominguez has a great teammate to learn from in fellow senior offensive lineman and captain DeMarcus Love. Dominguez and Love have both provided more than 20 starts each for the Razorbacks in their careers.

Spending four years with Arkansas has no doubt produced many good memories for Dominguez. The Razorbacks won their first bowl game since 2003 under Dominguez’s watch from the offensive line against East Carolina in the 2010 Liberty Bowl.

Looking forward to the rest of his senior season, Dominguez is looking to accomplish a major goal before he graduates.

“All of my goals are just team goals,” Dominguez said. “Individual accomplishments will come as long as we are winning. With that said, one of my main goals for this season is to go to a BCS game. That is basically what I want to accomplish.”

In order to reach that goal, Dominguez knows that every game this season is a big step towards the final destination. One of those crucial games in bringing the Razorbacks closer to that goal included the 31-24 victory at Georgia earlier this season. Not only was this an exciting win for the whole team, but this game meant a little more to Dominguez.

“Being from Georgia, there is no better feeling,” Dominguez said. “I’ve got three guys on that Georgia team that I went to high school with. To take one from Georgia with my Arkansas teammates was a really good feeling.”

As the Razorbacks continue to work hard in the Southeastern Conference, Dominguez looks for ways to continue to stay mentally prepared every weekend.

“I stay focused and motivated through preparation each week,” Dominguez said. “It is a tough schedule. That is the reason I came to the SEC. I knew it was going to be hard but Coach Petrino does a good job preparing us.”

Playing as an offensive lineman for UA’s potent offense has many perks. Offensive linemen play a key role in dictating the success of the offense each game.

“What I like most about playing on the offensive line is the fact that it is very detailed,” Dominguez said. “The smallest things that you do can either cost the team or make the team better.”

Looking back over his time in Fayetteville, Dominguez knows he’ll miss Arkansas and Razorback football. However, he noted there is one thing that always makes being a college football player special.

“What I will miss most is the game day atmosphere,” Dominguez said. “On game day, I look forward to running through the “A” in front of thousands of fans with my teammates. There is no better feeling.”

What comes next for Dominguez as he graduates this upcoming year from the University of Arkansas?

“I’m majoring in child development, so what I really want to do is go back home and work with a YMCA. I would really like to open up my own YMCA and do counseling.”

In the meantime, UA fans will be able to continue watching Dominguez lead the Razorbacks and the exciting UA offensive unit game-after-game towards their goals.

Dominguez is the son of Juan and Cynthia Dominguez.