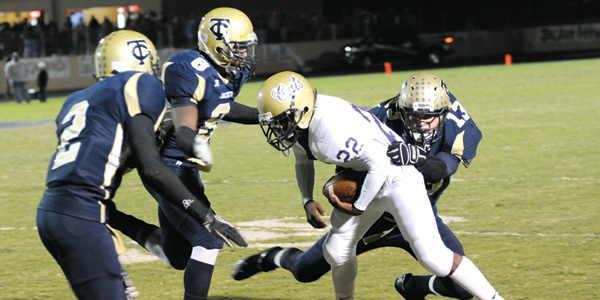 The Yellow Jackets jumped out to a 21-0 lead after one quarter Friday night but the Bearcats roared back to outscore them 13-7 in the second quarter and trailed just 28-13 at halftime.

After the Yellow Jackets scored six more points in the third quarter, to increase their lead to 34-13, the Bearcats outscored them 21-7 in the fourth quarter to cut the lead to the final of 41-34 before the clock ran out.

Pilcher addressed the team’s disappointing finish in the region standings.

“Obviously, our final records of 3-7 overall and 1-6 in Region 1AAAA play were not what we wanted or expected but we had a chance to win just about every game,” Pilcher said.

Pilcher said the team’s offense played strong against TCC, the No. 2 team in the region behind Northside-Warner Robins.

Junior running back Aaron Hall had touchdown runs of two and 11 yards. Sophomore running back Terry Lewis had 80 all-purpose yards and two touchdowns; one on a Bench pass and another coming after he blocked a TCC punt attempt, picked up the ball and ran in for a touchdown.

Pilcher said his returning players will start to focus on the 2011 season.

“We will go right back to work in the weight room in anticipation of spring practice,” Coach Pilcher said.

Donnie Pemberton, right, of Pepi presents a check to Ken Bailey, left, CEO of the YMCA, in support of Partners... read more