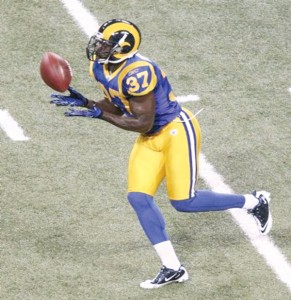 Butler was an All-Region player for the Bearcats went on to be an All-Atlantic Coast Conference (ACC) defensive back for the Georgia Tech Yellow Jackets., He was a member of the New York Giants team that beat the previously undefeated New England Patriots 17-14 in Super Bowl XLII Sunday Feb. 3, 2008, in Phoenix, Ariz.,

A week earlier, Butler suffered a knee injury during a heart-breaking 18-17 loss to the Tampa Bay Buccaneers in Tampa and was not expected to play against the Panthers, but to the delight of Rams head coach Steve Spagnuolo, he did.

“James Butler’s a tough kid,” Spagnuolo said. “He wants to be in there. He wants to play.”

Butler’s interception led to a Rams field goal. However, he left the game in the fourth quarter after suffering what appears to be a high-ankle sprain, according to The St. Louis Post-Dispatch. Butler had to sit out the team’s preseason games with a shoulder injury.

The 6-foot-3, 215-pound Butler is in his sixth NFL season and his second with the Giants. For the 2010 season so far, Butler has 20 tackles and two interceptions. He has 11 career interceptions.

On Saturday, May 23, Butler, son of the Rev. James Butler Sr. and Nadine Butler of Climax, returned to Decatur County for his annual James Butler Youth Football Clinic at Centennial Field.

During the clinic, which is coordinated by Bearcats football and basketball coach Kelvin Cochran, talked to some 120 local youngsters about the importance of character in their lives.

The annual clinic is part of the James Butler Dream Program, which focuses on mentoring, education and youth leadership.