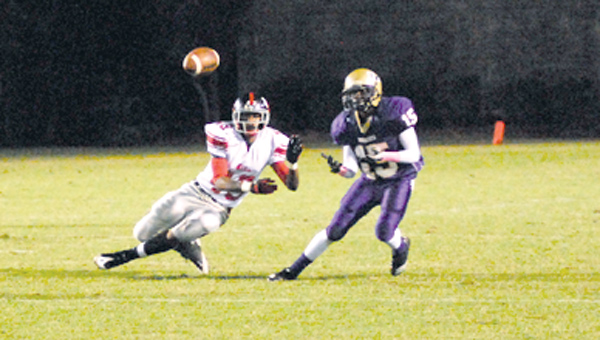 “We played hard on offense and defense but four fumbles really hurt us,” Coach Pilcher said. “All of our mistakes cost us a chance to win.”

Pilcher said he thought the Bearcats’ defense played well in the first half but thought they grew tired late in the game.

The Bearcats, who are 3-6 overall and 1-5 in Region 1AAAA play, will close out their season Friday against another region foe, the Thomas County Central High School Yellow Jackets. Kickoff will be at 7:30 p.m. at Central’s Jackets’ Nest Stadium.

BHS have lost three of their last four Region 1AAAA games by a total of 12 points.

Pilcher, who is in his 25th year as a head coach, said he has never before been through such a frustrating season.

“We have played hard and lost a lot of close games,” he said. “We are out of the playoff picture, but with a break here or there, we could have finished as high as second.”

Through the air, quarterback Steven Bench completed 11 of 18 passes for 238 yards and two touchdowns and Shawn Samuels caught three passes for 100 yards and a touchdown.

A 69-yard pass from Bench to Samuels and Samuels’ run for a touchdown off a fake punt with 3:37 left in the second quarter gave the Bearcats a 14-0 halftime lead.

Quincy Fortson caught two passes for 55 yards including a 50-yard touchdown pass with just 1:04 left in the game.