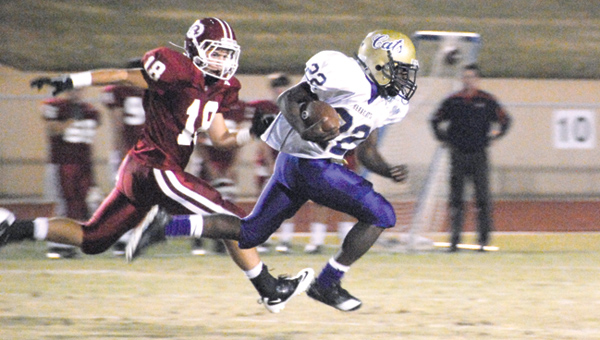 Concern about the welfare of his injured players was on the mind of Bainbridge High School Bearcats head football coach Ed Pilcher Monday morning as he reflected on his team’s 31-28 loss to the Warner Robins High School Demons Saturday night.

“Rohan should be able to come back to Bainbridge in about three days,” Pilcher said. “I’m planning to go back to Warner Robins in the morning to check on him. We are all very concerned for his health.”

Pilcher also expressed concern about injuries to offensive lineman Andrzej Jeglinski, who suffered a dislocated shoulder, and linebacker Brandon Linzy, who has a hip injury.

“Rohan, Andrzej and Brandon will all miss the final two games of the season,” the Bearcats head coach said. “They are all fine young men who played hard every week and we will miss them.”

As far as the game with Warner Robins is concerned, Pilcher said, while the team played hard, they made too many mistakes.

“I thought we had our worst defensive effort of the year,” Pilcher said. “We were lined up the wrong way a few times, and Warner Robins was able to take advantage by breaking big plays.

“Offensively, we moved the ball well, rushing for 235 yards and passing for 77 yards, but most of our yardage came in the first half. … We missed some opportunities on offense.”

On the offensive line, Kyle McMillan and Cole Grenada have both done a good job for the Bearcats at center, the coach said.

Pilcher said the Bearcats, who are 3-5 overall, 1-4 in Region 1AAAA play and out of the Region playoff picture, will be ready for Friday night’s Region 1AAAA homecoming game against the Lee County High School Trojans at 7:30 p.m. at Centennial Field.

“Our last three Region 1AAAA losses to Hardaway of Columbus, Northside of Columbus and Houston County have been by a total of 11 points. With a play here or there, we could have won all three.”