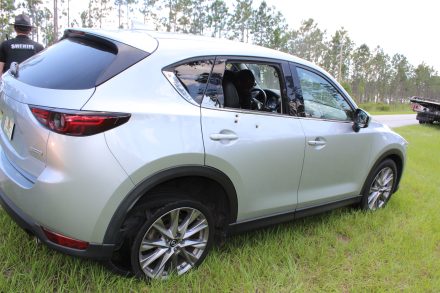 This Mazda was found abandoned with bullet holes going through it near Newton Rd. Investigator Vincent Edmond is now trying to locate the person who stole it.

On Tuesday, May 31, 2022 Decatur County Sheriff’s Office Deputies responded to the area of Pinehill Road near Newton Road in reference to a welfare check on an abandoned vehicle. Deputies arrived and found a silver Mazda CX5 SUV with a Florida tag abandoned on the side the roadway with bullet holes on the passenger side and rear. DCSO Deputies discovered that this vehicle had also been reported stolen out of Tallahassee, Florida during the evening hours of Sunday, May 29, 2022. The vehicle was later towed to the Decatur County Sheriff’s Office and processed for evidence by DCSO Crime Scene Investigator Terry Phillips. Contact was later made with the owner of the vehicle who denied any knowledge of the vehicle being shot at or having bullet damage. The owner claimed to have possibly dropped the vehicle’s keys out of their residence, which may have led to the vehicle being stolen.

This case is being investigated by DCSO Investigator Lieutenant Vincent Edmond. Any one with information about this vehicle is encouraged to call Lt. Edmond at (229)400-8020.