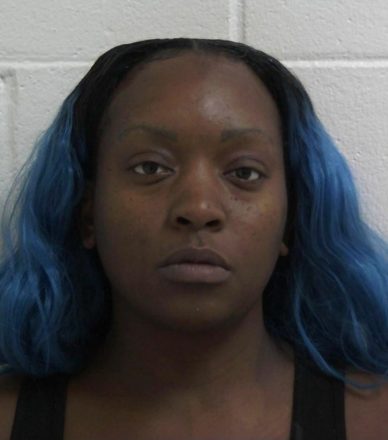 Bainbridge Public Safety responded to a report of a fight at the intersection of Water and Collier Street last Friday. While en route to the scene, BPS officers were informed that the situation had turned into a hit and run, with a female subject being reported as hit by a blue Chevrolet Camaro, and several other people allegedly being targeted by the Camaro driver as well.

At the scene, Decatur-Grady EMS transported the victim to Memorial Hospital, while BPS officers found fresh tire tracks leading off Water Street, over the curb and into the yard where the victim was found. Officers also found a broken passenger-side mirror that matched the Camaro’s reported color.

The following day, BPS received a call from a Vickie Johnson, who wanted to speak to officers about the hit and run. Officers met her at her residence, before transporting her back to BPS headquarters for questioning. According to BPS investigator Josh Glover, Johnson had wanted to “give her side of the story,” and didn’t believe she had hit anybody. However, thanks to witness testimony and video, it was determined that at least the victim who had actually been struck by the car had been intentional. According to Glover, Johnson had been arguing with the victim over Facebook for several days, which led up to them meeting in person to fight, before escalating to the hit and run.

“Many people don’t realize that the details provided by witnesses can be a critical element of the evidence gathered by officers,” Glover said in an official statement. “If a person is a witness to an accident or crime and can safely remain in the area to speak to an officer, it’s very important that they do so.”

Victoria Michelle Johnson was arrested, and is charged with hit and run, reckless conduct, reckless driving, driving while license is suspended or revoked, and two counts of aggravated assault.