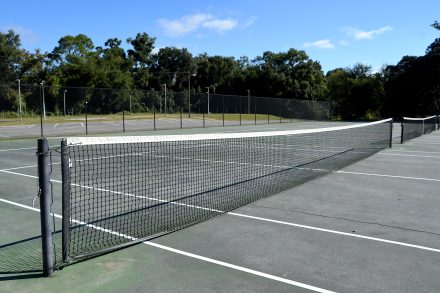 One of the tennis courts on Potter Street will soon be converted into a free pickle ball court for kids and adults to enjoy at no charge.

The Bainbridge Decatur County Recreation Authority met Thursday afternoon for their monthly board meeting. Among the items on the day’s agenda included the Rec Authority’s new pickle ball project, which will see three pickle ball courts installed at Potter Street, and eight courts installed at the Bill Reynolds Tennis Center. The estimated budget for the whole project is $150,000.

“I came as executive director in January, and just in the recreational field, we’re all aware that pickle ball is a growing sport,” he said. “It’s been said that it’s the fastest growing sport in America, if not the world.”

According to Holmes, the Recreation Board also wanted to offer free pickle ball for citizens.

These free courts will be on Potter Street, with one of the existing tennis courts being resurfaced into pickle ball courts.

Several vendors have been approached for the construction, with the bidding process to last 30 days.

“Once that’s done, at least by the end of this year, going into the first of next year, we’ll start and expect to have them done,” Holmes said. “Of course at Potter Street, we hope to have them done by next spring, but definitely by next summer.”

The pickle ball courts on Potter Street will also be a part of the Level Up after-school program.

“Pickle ball, most people would probably agree, it’s a little bit easier to learn and pick up than tennis,” Holmes said. “So that allows an opportunity to expose kids to the sport of pickle ball, and the ones that show the skill level, we can advance them into tennis. But if nothing else, the kids have more opportunities to recreate with pickle ball.”

“I’m excited that we have the opportunity to grow the sport of pickle ball in our community,” Holmes concluded.

For more information, Mark Gonzales can be reached at the Bill Reynolds Tennis Center, at 229-248-2020.