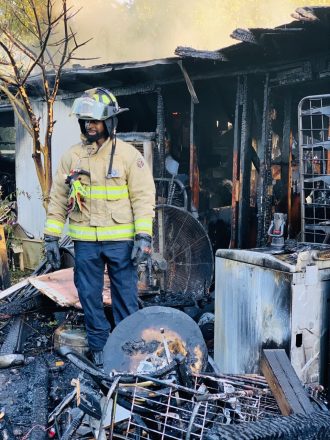 A Bainbridge Public Safety officer exits the charred ruins of a family’s home on Avenue C.

According to Fire Chief Doyle Welch, the officers were able to fully extinguish the flames, but the structure was deemed a total loss.

Initial reports indicate the fire was caused by an electrical issue.

The homeowner told officers she had gone to lay on the sofa around midnight, where she had a space heater plugged into a power strip. She then fell asleep on the sofa and woke up hours later to see her loveseat on fire. She said she quickly grabbed the kids and ran out of the house.

Due to the severe damage of the home, BPS brought in a backhoe at approximately 9:30 a.m. to bring down the remaining structural components because of the safety hazard it presented.

While the mother and two children were able to escape, they lost everything in the fire. They have since been taken in by the Salvation Army of Bainbridge, who has put them up in a hotel.

Anyone who wishes to provide help to the family or make a donation is encouraged to contact the Salvation Army of Bainbridge at 229-243-7250.