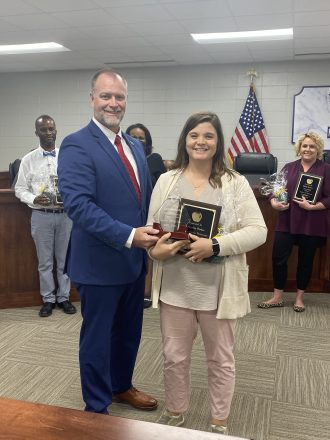 Superintendent Tim Cochran presents Catie Parker with her Teacher of the Year plaque.

Parker has been teaching for four years and is currently the music teacher at WBP.

WBP Principal Ortega Ross introduced Parker to the crowd, stating she was the most exemplified person that someone could ever meet.

“If you ever need a helping hand, Mrs. Parker is the one that will jump right in,” Ross said.

Ross said when students returned from virtual learning, due to COVID-19, Parker informed her they were still going to sing.

“West Bainbridge never stopped singing,” Ross said. “This teacher stands above any. She does programs, our news in the morning and you’ll just never find a better partner and better teacher than I can imagine this teacher right here.”

“Kids are excited to go to music,” Ross said. “She engages with them, and engages the rest of us too.”

Ross ended her introduction by saying West Bainbridge could not be more proud to have Parker represent them.

Following the introduction of all teachers, Superintendent Tim Cochran announced Parker as the County winner.

“I feel like I just won the Grammys,” Parker joked.

When originally voted Teacher of the Year for WBP, Parker said she was very appreciative, but also very grateful for the journey life has taken her on.

“Four years ago, I didn’t think I was going to be a kid teacher,” she said. “I was over in Alabama and just really wanted to give up. Then we moved over here, and I really feel like I’m where I’m supposed to be.”

“I didn’t expect it at all, I’m just a little music teacher,” she claimed.

Parker will now move on to the state competition, where she will represent Decatur County among some of the best educators in the state of Georgia.