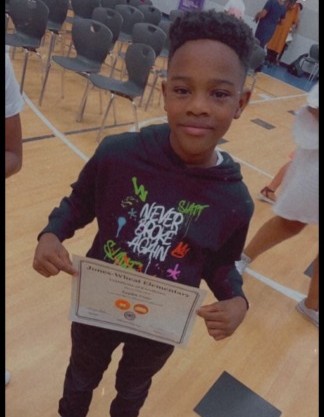 On Saturday, September 18, the Bay County Sheriff’s Office responded to a call for a drowning swimmer on Front Beach Road in Panama City Beach, Florida.

Upon arrival, Officer Allen made contact with a group of bystanders who explained a 13-year old, later identified as Curtis Wright, was pulled to shore by a group of good Samaritans, however a 28-year-old male, Naikel Bass, and 9-year-old, Kayden Evans, were still missing.

While Allen attempted to speak with Evans’ mother, BCFD was already on the search.

Allen reported that Evans’ mother was hysterical and in shock, but he was able to speak with Wright.

Wright told Allen he and Evans were swimming and became caught in a rip tide and started struggling. The boys called out for help, when their stepdad, Bass came out and attempted to save them. Reportedly, Bass was able to push Wright in and went out to get Evans, but never returned.

While speaking with Wright, Sergeant Shuman and Deputy Todd arrived on scene and began assisting in searching and collecting information. The Florida Fish and Wildlife Commission, along with the United States Coast Guard were additionally notified and sent assets to the area to assist in the search. In conjunction with the FWC and USCG assets, the Panama City Beach Police Department deployed a marine vessel as well as Corporal Ruthven with the BSCO’s marine unit.

At approximately 7:33 p.m., Allen was flagged down by an FWC officer on scene, who stated he had located someone, later identified as Bass. Allen relocated to where the FWC officer was and drug Bass out of the surf, where he was found to be unconscious and unresponsive. EMS then arrived and declared Bass deceased at approximately 7:50 p.m.

EMS subsequently took Wright to the hospital, along with his mother, to be checked out, while the Medical Examiner’s Office took control of the scene.

Allen notified an on-call chaplain to respond to the hospital and be with the family due to the nature of the circumstances and continued to remain in contact with the USCG officials throughout the evening.

The search for Evans was later called off and midnight and resumed the first light of the following day, where Evans was eventually found in the surf.

Bay County Sheriff’s Office has issued out their thoughts and prayers to the family, and said it was especially tragic weekend for them.

Public Information Officer Ruth Corley said the Bay County Sheriff’s Office responded to four different drownings over the weekend. The drowning following that of Evans involved a man trying to save his wife, who began cramping while out in the ocean.

Corley said she knows there is nothing worse than losing a family member on a day that was supposed to be memorable and fun.

For that reason, she wants to remind everyone that a single red flag indicates dangerous swimming conditions, due to rip tides.

“The Gulf of Mexico is deceptive,” she said. “It has the possibility of rip tides at any time.”

She said single red flags are among one of the most dangerous times to swim, because it gives people the false sense of security that they can still get in the ocean without worrying.

“Even on the best of days, it can still be dangerous,” she ended. “It’s just too difficult to fight.”