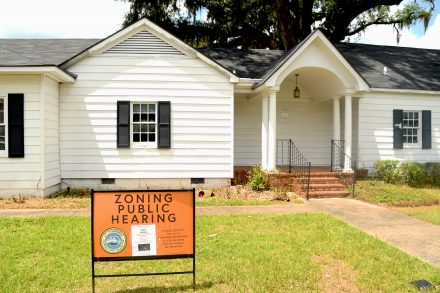 This old law office will be converted into a triplex by Mike Conder once approved by City Council.

Resident Mike Conder went before the Decatur Planning Commission this Tuesday afternoon, requesting conditional permission to convert a vacant office into triplex apartments. The office is the former law office of Harold Lambert, located at 326 West Water Street. The main change to the building would be the division of the building’s insides into three apartments: two 2-bedroom, 2-bath apartments, and one 1-bedroom, 1-bath apartment. The only noticeable exterior change would be repainting, as well as the replacement of the front door and addition of a new window to the back of the building.

“Duplexes are approved, triplexes aren’t, so the conditional use is we’re asking for one more than what’s allowed,” Conder said.

One of the concerns with apartments is resident parking, though as the office building already possessed it’s own parking lot, the city deemed there to be enough parking for residents and guests.

Conder acquired the property three months ago, and has been gutting the interior since.
“We’ve just kind of been taking all the old interior out of it, and we’re pulling the permit on it as soon as they approve this, and we’ll get moving,” he said.

The Planning Commission voted to approve the project, and will recommend approval to the City Council for next week’s meeting.

“We’re looking to create more residential estate in and around downtown,” Community Development Director Steve O’Neil told the Post-Searchlight. “He’s not changing the character of the building, it’s a positive development as far as we can see.”