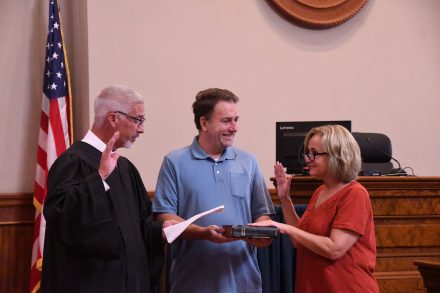 Ann Marie Rose Emmons takes her oath, given by Probate Judge Eric Gay, while her husband Pete Emmons looks on and smiles.

According to Emmons, current Chief Magistrate Judge Maggie Rentz Smith resigned due to family reasons and sent out a letter to the attorneys in the county, letting them know of the vacancy that would be available come Mid-July.

“When there are vacancies, someone has to make an appointment for an interim,” she said. “A Superior Court judge has to make that recommendation.”

She said she began thinking about applying for the position, because it really fit her background.

Emmons previously worked in a private practice in New Jersey, before transferring her knowledge into teaching.

She then taught law at Thomas University for several years, and felt that her ability to condense difficult concepts into everyday situations would make newcomers to the court system comfortable.

One of Emmons’ duties as Chief Magistrate Judge is to preside over Civil Court and hear landlord/tenant cases.

She thinks her background in teaching will especially come into play during this time.

“People who come into court for the first time, I want to put them at ease and not let them feel intimidated by the system and help them figure out what to do,” she said.

With her background in mind, Emmons said she was still in shock when she was appointed to the position. However, she said she is really looking forward to serving in this capacity.

“Maggie Rentz Smith is running a smooth, efficient office over there and I know I have big shoes to fill,” she said.

Emmons officially began her role as Chief Magistrate Judge Friday afternoon after being sworn in on Thursday. While this transition was a celebration enough, Emmons said it is also her anniversary week and it will be one she remembers forever, as she never imagined the love of her life for the past 20 years standing right by her side when this honor was bestowed upon her.