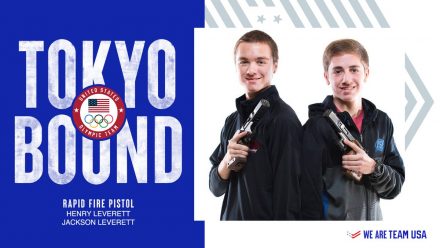 USA Shooting announces Henry Leverett and Jackson Leverett as the Tokyo 2020 Men’s 25m Rapid Fire Olympic Nominations. USA Shooting was awarded a second quota spot for this competition as a result of a quota exchange via the International Shooting Sports Federation (ISSF), adding to the original Rapid Fire Quota that had already been earned and thus allowing Henry and Jackson to fill the quota spots.

“It means a lot to me to have this experience with my brother,” said Henry Leverett. “It’s my first time in Japan and at the Games, so to have my best friend there with me is really comforting, especially when the competition and chaos begins.”
“It’s an honor to be named to the team, actually it’s an amazing opportunity. I still haven’t fully processed everything, but I’m excited to see it all and compete in Tokyo. It couldn’t have worked out better for us both to be going. To compete and support each other in Tokyo, well, that’s an experience in itself,” said Jackson Leverett.

The Bainbridge, Georgia natives started shooting in 2008 through a local 4-H program. Henry and Jackson shot in their first competition when they were 8 and 9 years old, respectively. It wasn’t until their dad saw an article in the newspaper about Rapid Fire Pistol that Henry gravitated towards that discipline. Their younger sister Abbie also shoots pistol, and their parents have taken up shooting as a hobby. For the last five years in a row, a Leverett has won gold at the Pistol National Junior Olympic Championships.

Both Henry and Jackson (only 17 months apart) are rising sophomores on the Ohio State University Pistol Team. Prior to collegiate shooting, the duo set four USA Shooting national records in junior men’s Rapid Fire and junior men’s Sport Pistol and represented Team USA in a dozen international competitions from 2016-2019. Henry won the U.S. Olympic Rapid Fire Quota spot for the Tokyo 2020 Olympics after placing 5th in the 2019 World Cup Bejing while Jackson helped Team USA win gold medals in Air Pistol and Rapid Fire in the 2018 Championship of the Americas. The Leverett’s were first-year students on the Ohio State University Pistol Team who took the NCAA National Championship title this past year.

Less than a year ago, both Henry and Jackson were interviewed by The Lantern, an Ohio State Student Publication stating, “They have their eyes set on competing in the 2024 Paris Olympics.” In the span of two weeks, the USA Shooting Olympic Team went from no Leverett’s to two, and the pair will get their shot at the Olympics much sooner than anticipated.

“I’m ready to work hard and perform my best in Tokyo. For the longest time, I didn’t think I was going, so to finally hear my hard work paid off and everything fell into place is a real treat. I’m ready to compete in Tokyo and hopefully Paris as well,” added Henry Leverett.