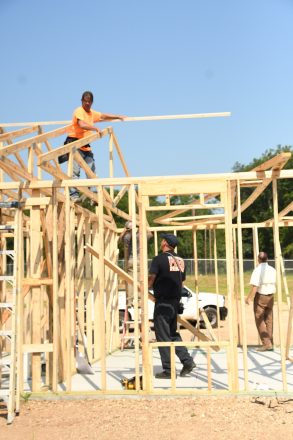 A-1 Industries on forefront of technology at new facility

A-1 Industries is Bainbridge’s newest business in the ever-growing industrial sector. The new business has already dove headfirst into community involvement, donating the trusses and walls to the law enforcement training facility. However, its business model is what most find intriguing.

A-1 Roof Trusses Founder John Herring spoke on his model of success and how he ended up picking Bainbridge to house the second location.

Herring started in the truss business in Pensacola, Florida, before migrating his career to South Florida, making stops in Central Florida along the way. He eventually opened up A-! Roof Trusses in Ft. Pierce, Florida with intentions of expanding.

The possibility for expanding became a reality when Herring was approached by Minto Communities about their new project in Panama City Beach. The project would include roughly 100,000 plus homes, all of which needed trusses built by A-1.

“When Minto Communities approached us, we really started looking into Lake City, Panama City Beach and the Georgia Panhandle,” Herring said. “We wanted to be near our material sources and Bainbridge became the favored location for all our needs.”

Herring said Bainbridge proved to be close to lumber, the mills and other major materials necessary to make their trusses.

While Bainbridge is a great location for their source materials, Herring said the Bainbridge location will also produce a newly developed product called EZWall.

“The purpose of EZWall is to make it more efficient on the job site,” Herring said. “It’s going to change the way America builds homes.”

A-1 also has a distribution agreement in the works for a treated material for fire, mold and termites that they integrate into the manufacturing process.

In order to do this, Herring uses the Predictive Index.

“The Predictive Index is a tool that was developed during the war that helps identify if you’re patient, detail oriented or a people person,” Herring said.

Herring has everyone who applies at A-1 take the Predictive Index, so he can find the right people with the personal traits that will make them succeed.

“We want to find natural traits and then train and coach people on how to best use that in this industry,” he said. “We don’t want to set people up for failure.”

Herring said over the years he’s used the Predictive Index, he’s had a lot of feedback.

“A lot of people are shocked with their results,” he said. “But, we want to help them build a career so they can be the best and then help them grow.”

Helping applicants grow, is only one of the reasons A-1 is a favorite among employees.
Trained workers can make $75,000 annually with great benefits, a 401K, health care and vacation time.

A-1 will only continue to improve their status among workers when their new facility is up and running.

“We are heavily investing into future technology,” Herring said. “We will be developing some Robotic processes, we have developed a new CNC system and prototyped it in Florida that will be brought to Bainbridge.

Herring promised that this facility will be like no other factory in the United States and will be the future model for the truss industry. He encourages people to apply and see the vast opportunities that await them.

The Bainbridge City Council met Tuesday, June 15, for their regularly scheduled meeting, where they unanimously approved a change to... read more