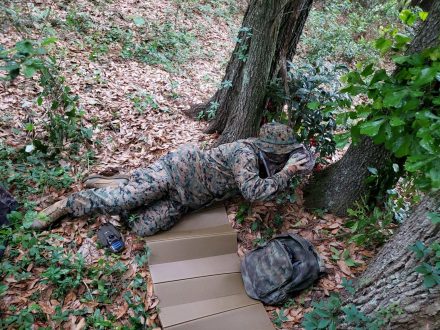 Investigators Justin Kelly and Adam Mobley spent many hours in the tree line watching Currin’s moves and learning the property.

Manhunt ends in over 30 felonies

A county-wide manhunt for wanted felon, James Bennett Currin, ended late on Tuesday morning after a concerned citizen phoned in to the Decatur County Sheriff’s Office.

DCSO Investigators Adam Mobley and Vincent Edmond received prior intel on Currin approximately six months ago, when they heard he was selling methamphetamines and stolen guns. However, the informant made it clear to investigators Currin was extremely paranoid and had surveillance cameras surrounding his home and had made comments if the police did come after him there would be a shoot out.

Mobley and Edmond continued to monitor him until a burglary occurred last week that led to information about stolen guns. The stolen guns all pointed to Currin.

With this new information, Mobley wrote a search warrant on Friday, April 3. This warrant allowed Mobley, Edmond and Investigator Justin Kelley to perform surveillance near the tree line of Currin’s home.

They began the surveillance on Sunday, April 5 at 6 a.m. They focused on tag numbers, people who were coming and going and Currin’s habits.

Sunday night, investigators decided they had enough information to take down Currin, but planned to approach him in his yard, due to threats and the unknown amount of guns inside the home.

Monday evening, Currin took his dog, a pit bull, outside for a walk, when investigators enacted their plan.

Investigators had planned to get as close as possible before giving verbal commands, because they knew he may run. Mobley said when they were about 30 feet away from Currin, they told him to get on the ground. However, Currin began to go right, but Kelly was blocking him, so Currin started to run left. During this time, Currin’s dog was chomping at the bits, ready to attack.

Mobley instructed Currin several times to not let the dog go, as the dog was already jumping.

Currin then let the dog loose and it lunged at Mobley, grabbing his pants and biting him. Mobley was forced to shoot the dog, which he said he hated doing, but the dog did live and is now in the possession of Animal Control. While fighting off the dog, investigators also noticed Currin had a pistol in the waistband of his pants.

Currin then began running away, while investigators worked to neutralize the situation.

“He had a good lead on us, because we were worried about the dog,” Mobley said. “Kelly then ran after him, but Currin ran into the woods, which is super dangerous for us because we can’t see as well.”

Investigators continued the chase, but at a safer pace, and called in for additional help, along with a helicopter and tracking dogs from Valdosta.

Investigators searched all night to no avail, but Tuesday morning a silver lining came.

Currin called a friend to come pick him up.

A passerby noticed the car driving back and forth and called it in as a suspicious person. When approached, the driver confessed they were there to pick him up.

“We then knew he was in the area,” Mobley said. “We called everyone back and concentrated in that area.”

In the midst of the search, a homeowner saw a man in his backyard limping and immediately called authorities.

It was the right area, approximately a mile down the road on Hines-Perkins and deputies knew they had found him.

Currin still had the gun in the waistband, but no longer put up a fight.

“He had completely given out and was tired of running,” Mobley said.

During the manhunt, investigators also took to Currin’s home, where they found 26 guns, ranging from assault rifles to handguns with loads of ammunition. They additionally found a trafficking amount of methamphetamine, along with a marijuana grow containing 50 plants and lights. They found stolen property, including guns linked to several recent burglaries and four guns with filed off serial numbers, which is considered a federal offense.

Mobley said this was an excellent case to make because it will lead to the resolution of many cases.

“We already have this linked to four burglaries and there’s no telling how many cases this will close,” Mobley said. “We are extremely thankful to the community; this case was extremely stressful and took a lot of hard work from everyone.”

Currin’s case will now be taken to the federal level once the reports are completed by investigators.

Georgia experienced a sharp increase in Coronavirus cases and deaths over the weekend, rising to 8,818 confirmed cases and 329... read more