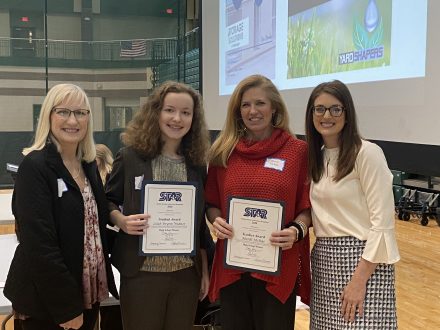 In order to obtain the STAR nomination, high school seniors must have the highest score on a single test date on the three-part SAT and be in the top 10 percent or top 10 students of their graduating class based on grade point average. The student named the STAR student then selects the teacher they feel has been the most instrumental in their academic development.

Lilah Widner was the 2019 STAR Cougar from Grace Christian Academy and chose Mardi McRae as her STAR teacher.

Widner has been a student at GCA for 14 years and has actively participated in several clubs and community activities. She was a graduate of the First Port City Youth Leadership program and is an avid musician. Widner and fellow musicians formed a music club that works to provide companionship and entertainment for residents at Riverside Place.

The group titled Riverside Friends visits the home once a month to perform, where Widner plays the violin or piano. With her music background, Widner has won several awards, creating a well-rounded intelligent, artistic individual.

Widner was thankful to the Chamber for recognizing her and most thankful for Mrs. McRae, who she said has challenged her daily, while still providing a fun environment.

Sprenkle was named the 2019 STAR Bearcat and system winner. She chose her father and teacher, Jody Sprenkle as her STAR teacher.

Sprenkle is one of the only students to win three awards through AP courses in their high school career at Bainbridge High School.  She won in the categories of history, government and politics and psychology.

She also won the Georgia Merit Award for being the top ten percent of her class, and also holds the seat of number one in her class. Sprenkle is hoping to be named Valedictorian upon graduation.

In addition to all these accomplishments, Sprenkle, like Widner has an ear for music and is the flute section leader, along with band captain.

Upon graduation, Sprenkle plans to attend Georgia Southern University or ABAC to earn a Master’s degree in nursing, where she hopes to become a nurse practitioner with a focus in pediatrics.

Sprenkle noted that this would not have been possible without her father and STAR teacher. He has been the most influential educator in her life; he not only taught her school subject matters, but life lessons as well.

Sprenkle will now compete for region-wide honors, where the region winners can compete for the state STAR award.