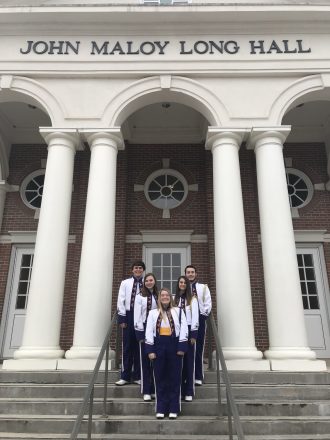 Thirteen members of the Bainbridge High School Band participated in the 47th annual Southeastern United States Honor Band Clinic at Troy University over the weekend. While there, two band members received scholarship offers and one received a fee waiver to return the following year.

The band was comprised of McKenna Stegall, Brooklyn Willis, Paige Overman, Alexis Robinson, Shelbie Stevens, Colby Weathersby, Gracie Surratt, Austin Aldridge, John Ingram, Michael Jackson, Ashton Aldridge, Colby Whitaker and Carter Worthington. These members were among the 800 selected from across the Southeast to attend the band clinic for three days to use their musical ability and perform in the honor bands.

Upon arrival, the students completed an audition and were placed in one of the six honor bands available. They then learned four musical selections to be performed on the final day of the clinic.

The honor bands feature instruction by internationally recognized clinicians and give band members scholarship opportunities and a chance to attend concert band performances, while participating in the final honor band concert. In addition, it gives students the opportunity to be exposed to young musicians from all across the South.

The honor band awarded two BHS students, Stegall and Robinson, with a scholarship offer this year. They were chosen for achieving First Chairs in their bands based off their audition. Ingram, who is a sophomore, also earned First Chair. Because of this, he received a fee waiver and an invitation to return to the clinic next year.

Band director, James Sewell and the students who attended want to thank the Decatur County Band Boosters for their support and in aiding them, so they were able to participate in the Honor Band Clinic.

Mike Wiley Featured in ‘Breach of Peace’ at ABAC…