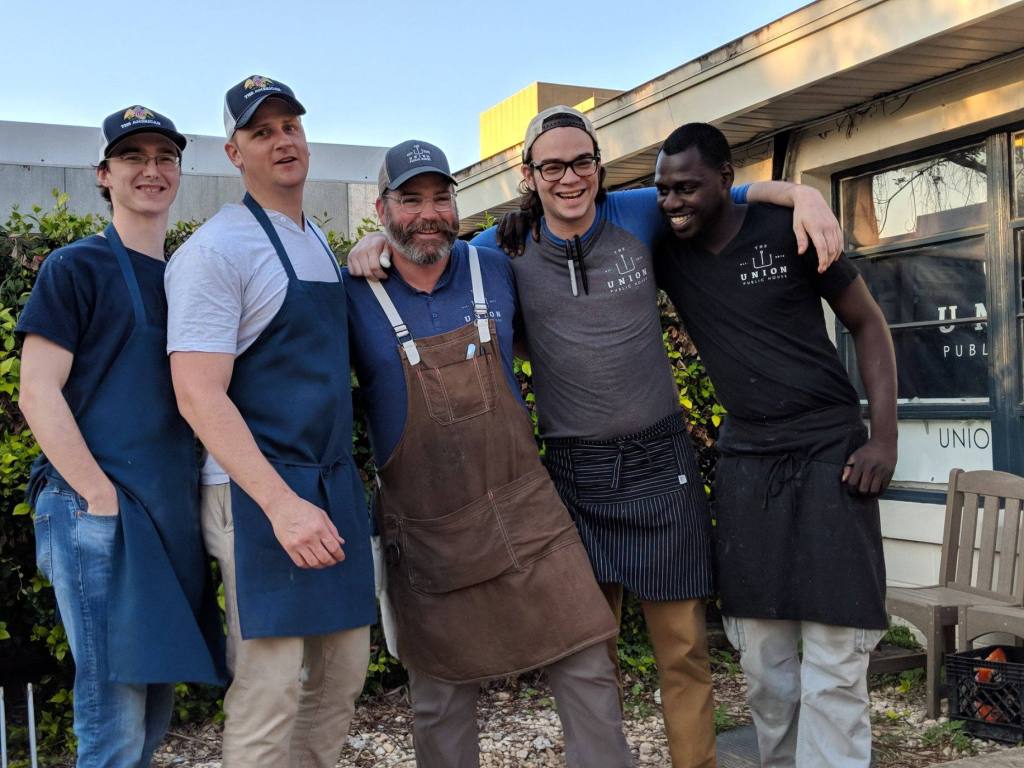 Tyler Thomas (second from left) stands with other chefs from the Connect Dinner in Pensacola on Tuesday.

Tuesday evening, Chef Tyler Thomas of The American partnered with Chef Blake Rushing of the Union Public House in Pensacola, Florida for a Connect Dinner that celebrates Southern grown and made products and connects the chefs to the local farmers who produce these goods.

The Connect Dinner, which was made possible by Eat Y’all out of Mississippi, featured a five course dinner that paired with locally made cocktails.

The first course was created by Chef Blake and was a smoked oyster tartine. It was oyster stout bread, black garlic vinaigrette rouille, house coppa and celery leaf. The ingredients were featured from Portersville Bay Oyster, Craft Gourmet Bakery and the Black Garlic Market. The dish was served with a Wheatley Vodka Peach Mint Fizz.
Thomas created the second course, which was a grassfed beef carpaccio with black garlic honey. Thomas used Grady Ranch’s New York Strip to make the beef carpaccio.

He said he seared and sliced the meat and kept it pretty rare before adding Thomasville tom by Sweet Grass Dairy instead of Parmesan cheese. He then used local microgreens such as kale and baby arugla and made a bird’s nest look with olive oil and added a quail egg on top and garnished it with the black garlic honey. The product is out of the panhandle and is a locally grown black garlic. The garlic is then added to the honey and turns it black, giving it almost a beefy flavor, Thomas said.

Heather Thomas said everyone really enjoyed the beef carpaccio and the quail egg.

“It was probably the most photographed dish of the night,” she said.

The third course was prepared by Rushing and was a royal red gulf shrimp chili galletti that had royal red chili beurre blanc, yellow tomato romesco and scallion. This dish used ingredients from Alfresco Pasta and was served with a Buffalo Trace and Steen’s Cane Syrup Old Fashioned.

Thomas created the dessert, which was a handcrafted puff pastry with double cream Green Hill and fruit preserve from Sweet Grass Dairy. It was served with a Buffalo Trace Praline Milk Punch.

Thomas said the dessert was his take on a baked brie. They added chocolate in between layers on Plant City strawberries with a jalapeno glaze on top.

Thomas was thankful to work with Rushing again, and said there will be a third connect dinner that will be hosted at The American again that they plan to tie to a charity.

In the meantime, The American will be hosting their spring wine pairing dinner series on April 23rd. They will also be hosting an Easter brunch and The American Bluegrass and Beer Festival on May 4 from 5- 11 p.m.