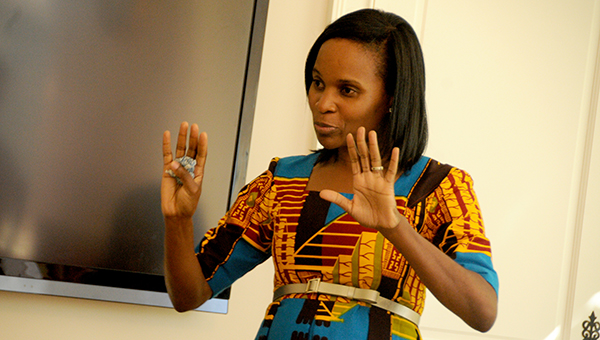 It’s difficult to avoid hearing or reading about Ebola.

It has become equally difficult to avoid feeling nervous about the deadly virus as its outbreak continues to kill thousands of men and women in West Africa.

It has even resulted in a death in America. Thomas Erin Duncan returned from Liberia and was admitted into Texas Health Presbyterian Hospital on Sept. 30. The virus took his life eight days later.

The fear is real, and Paulyne Ngalme Ntuba understands that is human nature. But she also wants people to know the truth about the virus and clear up any misunderstandings.

Ngalme Ntuba, 39, spoke at the home of Avery and Mary Lynn White in Bainbridge Saturday about her experience with the virus. She has spent the past 14 years as a communications and community engagement specialist for the U.S. Center for Disease Control and Prevention, focusing primarily on HIV/AIDS at the Atlanta headquarters. But when asked to travel to Guinea for 30 days to spread awareness and educate citizens on Ebola, she said yes.

Looking back, the Cameroon native wonders what pushed her to agree to visiting ground zero for virus’ most recent outbreak.

“I describe it as the fear part of my brain got deactivated,” Ngalme Ntuba said. “And I’m not a reckless person, but I prayed about it because I just felt this was what I should do.”

She felt it was part of God’s plan, and she accepted that much. But it didn’t come without second thoughts, primarily how it would affect her family and how others would perceive her decision.

“I didn’t tell anybody on my team because I was embarrassed,” Ngalme Ntuba said. “One: this is Ebola—this is frightening. Two: I’m a mother, I have a 2-year-old and a 4-year- old, so I didn’t say anything to anybody apart from my supervisor, my husband and my mom.”

A few weeks later, she landed in Guinea, a place where Ebola had already taken more than 1,500 lives since March, and got to work with its citizens in an effort to halt the spread of the virus.

The panic finally began to sink in.

“I really panicked,” Ngalme Ntuba said. “I thought this was some serious stuff, but it was too late, so I just gave it back to God through prayer.”

While there, she held meetings with local teachers, students and healthcare workers on proper Ebola treatment.

“If people show the symptoms, don’t touch them, we will have special people with special gear to take them out of there,” Ngalme Ntuba remembered explaining to those present at the seminars.

She addressed concerns about Guinean tradition and religion clashing with the safest and most cost effective ways of handling the dead bodies of Ebola victims.

The experience was exhausting, but dealing with the Ebola hysteria on the front lines has inspired Ngalme Ntuba to continue spreading awareness.

“We don’t often get to meet one of God’s real warriors—real heroes,” Mary Lynn said. “When I read about Paulyne, I knew exactly that’s who she is; someone who heroically answered God’s call.”

Story of the season