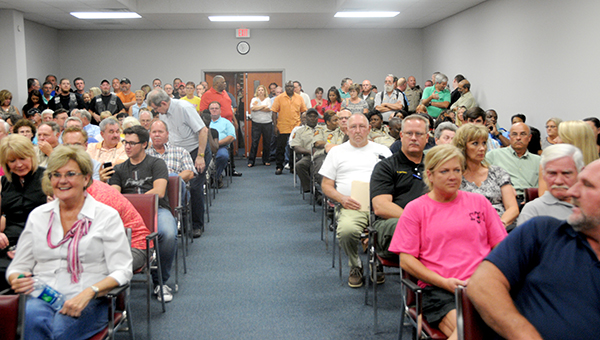 Decatur County Sheriff Wiley Griffin announced Tuesday at the County Commission meeting that the legal fees for his recently indicted son Wiley Griffin, IV, would be paid by the Griffin and Pennell families.

“When this case is concluded, I am fully confident that Decatur County, Grady County and the federal government will make the correct decision to reimburse my son’s attorney fees to the Griffin and Pennell families,” Griffin said to the Board of Commissioners and a full room of supporters.

Decatur County Attorney Brown Moseley said because the officers were in Decatur County uniforms and acting under the authority of the Decatur County Sheriff’s Office, the county is obligated to pay for legal counsel.

“These officers are charged based on acts that allegedly have been committed while they were in uniform and why they were acting under the authority and at the director of the sheriff of Decatur County,” Moseley said. “I have reviewed state law in a number of case decisions, and it is my assessment the county is under obligation to provide legal representation to these charged individuals based on the language in the charges in this indictment.”

Decatur County Chairman Frank Loeffler said the fees would be paid with money from the Sheriff’s Office budget.

Loeffler also asked Moseley to draw up a policy stating this will be Decatur County’s stance on all Decatur County employees moving forward.

Croley, Kines, Umbach and Griffin, IV, were indicted earlier this month and charged with deprivation of rights under the color of law, false reports and tampering with witness, victim or an informant for allegedly beating a Bainbridge resident at Bainbridge BikeFest 2012 and allegedly creating false reports to hide the incident.