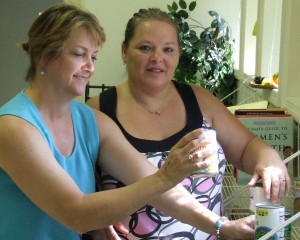 Someone Cares Soup Kitchen, which was operated briefly in 2012 by Patricia Anderson in a building at the fairgrounds off Vada Road, has now become the Someone Cares FREE store.

The new venture is a follow-up endeavor that will be operated by Anderson and Kim Morrison in the same building, thanks to the Decatur County Commission that has allowed the two women to lease the building for the sum of $1 per year.

According to Anderson, the soup kitchen was well supported by a corps of volunteers, as well as those who needed a meal, until the Decatur County Board of Health said the building didn’t meet code for serving food to the public. It was shut down after three weeks.

The project was later taken over by the Bainbridge Church of God on Independent Street, where it still serves free meals to anyone on Thursday evenings.

Meanwhile, Anderson, who is determined to have a ministry of serving those in need, has been handing out food boxes of non-perishable items on an as-needed basis from the original location.

Now, she and Morrison are opening what they call a “free store,” where they will distribute clothing and household items in addition to the food boxes.

They are picking up what they describe as “yard sale leftovers” — things that did not sell, and accepting donations from people who are moving and want to get rid of items they no longer need. They will even pickup.

The two women encourage the public to continue to make donations of non-perishable food for the food store. A typical box would contain bread, canned tuna, canned vegetables, fruit, rice, peanut butter, powdered milk, teabags, sugar, and any personal health care items, such as bath soap, toothpaste, etc. “When we don’t have enough food to make up a box when we get a request, then we go out and buy it,” said Anderson.

They are encouraged by the actions of a recent recipient to whom they gave a food box a couple of months ago.

This week that individual contacted them and made a donation of $20, some clothing and other items in order to pay forward.

The two are preparing the building to display the articles and will be open a few afternoons a week, beginning Saturday, August 9 at 10 a.m. For more information, contact  Anderson at 220-4469 or Morrison at 400-0064.