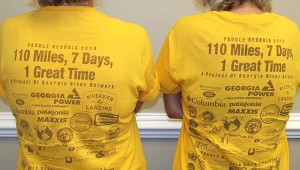 The annual canoe/kayak trip is part of the Georgia River Network’s Paddle Georgia 2014.

This was the tenth year the organization has sponsored the trips, and over 2800 have participated over more than 900 miles of Georgia rivers.

This was a first time for Harrell and Barber to make the trip. They attempted to register last year when the termination point was in Bainbridge, but were too late.

Demand is high for this trip and many of the originals have become regulars, taking the trip every year.

“The day it comes on line you’d better hit the button,” advises Harrell.

She did so this year and even then they were placed on a list of alternates. To their good fortune, someone backed out and they were able to go.

They describe the experience as being very well organized and every detail taken care of. Once you are accepted to take the trip you are given information, including the agenda day by day, told what to bring and what not to bring. One of the necessary articles listed to bring was “a flexible mindset.” That is to go with the very rigid routine that is set out for the paddlers. The day begins at 6 a.m. and ends with lights out at 10 p.m.

Catered food is supplied at an additional price, described as reasonable, and special treats man occur around the river’s bend, when “Magic Trail” people appear on the bank with frozen treats to hand out to the hot and tired paddlers.

Each evening they stay in designated areas, such as school gymnasiums, except for two nights when they must camp in tents. Often there are programs of entertainment provided. There are porta-potties and portable hot showers at every stop.

Even so, neither of the Decatur County women knew for sure what to expect. For instance, they were both surprised that the river ran through downtown Atlanta.

The scenery changed daily from industrial complexes to luxurious mansions on the river banks and birds and cows in the rural areas. They also drifted right past Six Flags amusement park.

Roz said she had some concerns about the rocks and rapids at first and she didn’t know if she would be able to row for seven days. Lindy said her concerns were the uncertainty of the weather and how much she disliked it when she had to sleep overnight in a wet tent with all her wet gear, then pack it up again in the morning.

The last night was spent in Newnan where there was a big celebration, complete with fish fry and a canoe full of ice cold seedless watermelon.

On day four the group only rowed 10 miles, but were picking up litter along the way from the water and shores. One of the most unusual items found was a bottle from 1977 with a message in Spanish. It was interpreted as a curse written in Spanish.

The group of 400 included people of al ages. There were elderly as well as a group of students who had received a grant to accompany their teacher on the trip and learn natural science. There were families with small children, and what amazed both Harrell and Barber was the way people worked together.

“There was no bickering. Everyone got along and the kids were great. They even entertained us on talent night,” recalls Barber.

They were each allowed 40 pounds of gear, which they carried in backpacks.

Harrell said they want to go again and next time they will know to carry everything in a large plastic storage or tool box, on wheels.

Persons interested in cruising down the river next year can learn more about the project by contacting Paddle Georgia.