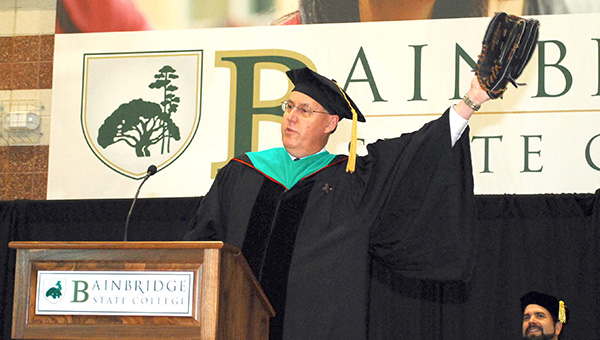 State Sen. Dean Burke stretches out as if catching a fly ball during his commencement address Saturday.

By Carol Heard
Special to the Post-Searchlight

Bainbridge State College honored more than 200 graduates who participated in the College’s 40th commencement Saturday, May 10, as well as honored those who helped pave their way more than 40 years ago.
Founding President Edward Mobley, and charter faculty and staff members Drs. David Hay, Ray Chambers and Jim Young, and the late Drs. Bob Lane and Fred Henderson were recognized during the commencement. Also recognized was one of the first graduates of the institution, Tuffy Nussbaum, who along with Terry Prince graduated in a simple ceremony held in Dr. Mobley’s office in 1974.
Dr. David Hay was the founding Student Services director, Dr. Chambers was the founding professor of political science and Dr. Young was the founding professor of history. Also recognized was founding professor of biology, the late Dr. Lane, and founding professor of English and Humanities, the late Dr. Fred Henderson.
“To all of these difference-makers, we join together as one BSC family to say, ‘Thank you,” Bainbridge State President Richard Carvajal said. “Thank you for everything you did to build this institution that today has an annual economic impact on our region of more than $81 million, and which has changed the lives of thousands of its citizens – including, of course, our great group of graduates with us today.”
The parade marshal and mace-bearer, Executive Assistant to the President Barbara Snipes lead the processional of graduates and other VIPs into the Student Wellness Center’s gymnasium to begin the commencement. Snipes, who said she will retire in December, has been with Bainbridge State for 32 years and has worked for every president in the institution’s history.
Julie Darley of Bainbridge was named Bainbridge State’s 2014 Outstanding Graduate. She graduated Saturday with an Associate of Arts with a concentration in psychology. Darley served as president of the Honors Program as well as president of the Phi Theta Kappa Honor Society and Sigma Kappa Delta, the English Honor Society. In nominating Darley, Associate Professor of History Michael Kirkland said: “Coming to the College as a graduate of the GED program, no other student that I know of has worked as hard and accomplished as much as this one.”
Four other graduates were recognized on stage Saturday as nominees for Outstanding Graduate. There were Tayler Adams of Pelham, Heather Ireland of Meigs, Cerisee Snow of Barney, Ga., and Kristan Whatley of Blakely.
In total, there were 408 degrees awarded and 84 honor graduates.
Mother’s Day treat
Held the Saturday before Mother’s Day, the day was special to Debra Stubbs of Bainbridge. She graduated the same day as her middle daughter, Andrea.
Stubbs, who was laid off in 2009 from a job she had for more than 25 years, earned her third degree from Bainbridge State on Saturday, an Associate of Arts with a concentration in business administration. She plans to continue at Bainbridge State to pursue her bachelor’s degree in business management. Andrea earned an Associate of Arts with a concentration in early childhood education and is currently working on her bachelor’s degree from Albany State University.
“Mother’s Day for many mothers is special, but the fact that we are walking together is a blessing,” Stubbs said, who took a full load of courses during the fall and spring semesters to try to walk across the stage with her daughter. She said she just wanted to graduate with her daughter, not thinking it was the same weekend as Mother’s Day.
“It’s a real gift to see my daughter graduate,” said Mrs. Stubbs, who said her daughter served as an inspiration to her because she never gave up.
Stubbs has been married to Larry Stubbs for more than 27 years, and they have two other daughters besides Andrea; Veronica Timpson, who graduated from Albany Tech, and 15-year-old Selena, who attends Bainbridge High School. The Stubbs also have three grandchildren.
Sen. Burke: It is all about margin
Commencement speaker State Sen. Dean Burke told the graduates the difference between winning and losing and the difference between success and failure are margins.
Using a baseball glove and ball as a prop, Burke said a ball player becoming a goat or a hero might be the margin of less than an inch if the ball falls in the outfielder’s glove or goes into the stands for a home run.
The state senator also illustrated how margins can play into the future of the graduates by painting how two factious graduates lived their lives – one who spent and lived more conservatively and the other graduate who was not as wise with his resources or time.
“Anytime in the future when you are overwhelmed or over-stressed in life, I hope you will take a moment to remember old Dr. Burke’s speech on your graduation day, and remember to review your life and make sure it has margin built in,” said Burke, who has been a practicing physician for 28 years. “Think about your finances and your time and your spirituality and make sure you’ve built in a little extra margin of safety. I can promise you will be much happier and successful in all you do.”