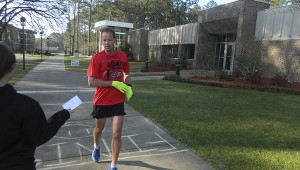 The Bainbridge State College Student Veterans of America organization hosted its second annual Purple Heart 5K and 10K runs Saturday at the college.
Greg Waddell won the 5K run with a time of 18:19. Amy James was the top female finisher in the 5K run in a time of 23:34. She was seventh overall.
The top overall finishers in the 10K run were the husband and wife team of Philip and Julia Sura of Tallahassee, Fla. Philip’s overall winning time was 39:32 and Julia’s female winning time was 48:05.
There were 46 runners in the two run fields. Organizers of the event were Bainbridge State College professors Doctor Eric Dueno and Doctor Juan Gomez.
Proceeds from the runs benefited the Red Hills Wounded Warrior Group, Inc., that was organized in 2011 by Walter Hatchettt and Brian Proctor for the benefit of wounded soldiers returning from active duty overseas.
The purpose of the organization is to organize outdoor hunting events for members and their fellow wounded soldiers who would otherwise not have such opportunities afforded to them.
The list of the organization’s invited veterans is made up in cooperation with the National Wounded Warrior Project. It consists of men from the states of Georgia, Florida and Alabama.
Members of the Red Hills Wounded Warrior Group, Inc., were on hand Saturday to meet and thank the runners for their participation.