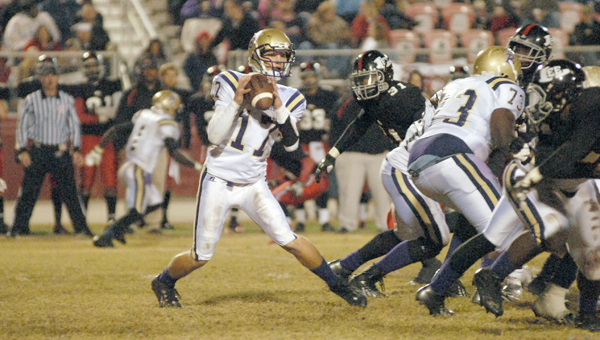 Senior quarterback Preston Norris drops back Friday night to throw the ball. The Trojans held the Bearcats to only seven points in the first half.

The Bearcats were determined to run the ball up the middle Friday night against Lee County High School, but the Trojans were equally determined to stop it.
With their 38-14 loss against the 9-1 Lee County, Bainbridge ends the regular season 5-5.
“They’re a good football team, you’ve got to give them a lot of credit,” Bearcat head coach Jeff Littleton said. “They got after us from the beginning and we didn’t match their intensity.”
Senior quarterback Preston Norris was nine for 22 on passing, throwing a total of 152 yards.
“I don’t know if it was the environment, or what,” Norris. “We just weren’t ourselves. The pressure was tough, but I was trying my best out there.”
The Trojan defense was able to confuse the Bearcats offense to keep them from moving the ball down the field. Running an odd front and blitzing frequently, Lee County was able to confuse Bainbridge’s blocking schemes.
“That’s what they do,” Littleton said about the Trojan’s defense. “We’ve been practicing that all week, but it’s hard to simulate that during practice.”
Norris was sacked four times. The offensive line wasn’t able to predict the Trojan’s attack and let players by.
Senior running back Aaron Calloway rushed for 103 yards on 25 carries, taking hits and getting stuffed at the line of scrimmage.
The Trojans busted out of the gates quickly, scoring on their first drive within the first minute of the game, which lit the scoreboard to 7-0.
When the Bearcats got the ball next, they were able to put together a 6-play drive. Norris connected with senior wide receiver Craig Cooper, leaving the rest to Calloway. They were stopped cold by the Trojans and forced to punt.
“The pressure was crazy,” Cooper said. “The whole team came out here to fight hard. We played our best.”
On the Trojans’ next drive, the Bearcats recovered a bad snap as Lee County was knocking on the door. They didn’t move anywhere on three downs and successfully pulled off a fake punt, but fell a yard short of thee first down.
Lee County kicked a field goal on their next drive and held Bainbridge to a three-and-out. On their next drive, the Trojans scored on a quarterback sneak, bouncing the score up to 17-0.
Bainbridge tried to score before the half, but the Trojan defense had the Bearcats head spinning. The entered the locker room at halftime still 17-0.
The Bearcats erupted in their first drive of the second half with Norris connecting with senior wide receiver Greg Cooper for a 55-yard pass play. Calloway punched it into the end zone to raise their score 17-7.
Lee County took the Bearcats’ touchdown personally and scored three more touchdowns in the half, holding Bainbridge until the final minute of the game where Calloway found a seam and ran 10 yards for a touchdown.
The game ended 38-14.
“They’re a good football team and they just had us beat,” Littleton said about the Trojans.
Next week, Bainbridge travels to Ware County next Friday for the first game of payoffs.