What to watch: Bearcats to face Yellow Jackets 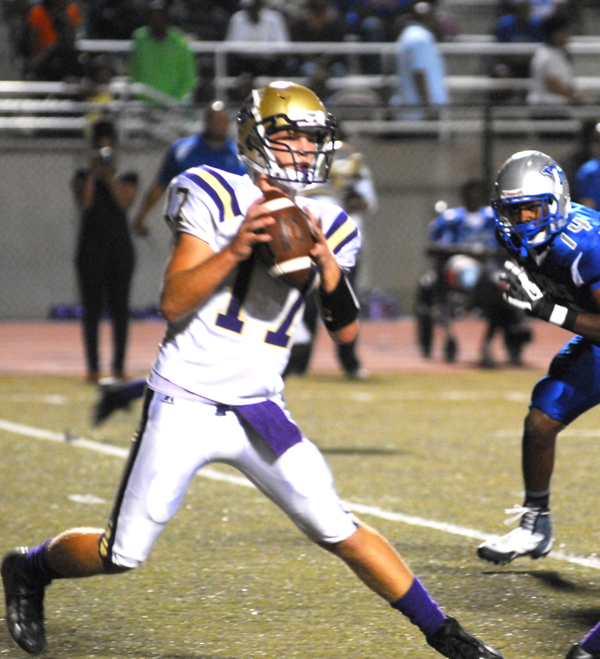 Following a two weeks ago in Atlanta and a by week last week, the Bearcats suit up to defeat the Yellow Jackets Friday at Centennial Field. QB Preseton Norris looks to throw a pass in Atlanta against the Lions last Friday. — William Hand

Following a 36-0 shutout loss against the Westlake Lions last week, Coach Littleton and the Bearcats are looking to bounce back Friday night against the Thomas County Central Yellowjackets and pull off a victory at home.
Littleton’s focus at practice this week is to improve on tackling and fix missed blocking assignments. But with four starters on the bench suffering from injuries, it might be easier said than done.
“We’ve still got a few injuries with people out right now,” said Littleton. “Basically people are out all across the board.”
Lineman Tamarack Smith is recovering from a leg fracture and center Tate Griffin is still healing from a back injury.
Fullback Jalyn Busch is back practicing limited reps and defensive end Corey Durham is planning on a doctor’s visit next where he’ll find out more about his injury. Neither will play Friday night.
Tightend Hudson Reynolds will be on the field Friday, ready to go after recovering from an ankle injury.
The key to a win against the Yellowjackets is stopping their veer offense. With an arsenal of talented players, Bainbridge’s tackling will have to be in full force to stop them from scoring.
“They’ve got a lot of good players on offense,” said Littleton. “The offensive line is solid, defensive line solid.”
Despite the Yellowjacket’s strong team, Littleton feels he knows what to expect from them having played them when he was in high school. But that doesn’t mean his team shouldn’t be fully prepared for anything that comes their way.
“We’ve got to get better,” said Littleton. “We need to try to find a way to stay close during this ball game and have a shot at the end.”
Bainbridge is 2-2 with wins against East Gasden-FL and Early County, both shutout victories. They’ve earned 29 total points this season, averaging just over seven points a quarter.
Thomasville is 4-1 for the season, their only loss being against Valdosta back in August. Bainbridge has had a history of close games with the Yellowjackets, particularly with last season’s heartbreaking loss, but is looking forward to crushing them at home.
The Bearcats will kick off Friday at 8 p.m. at Centennial Field.