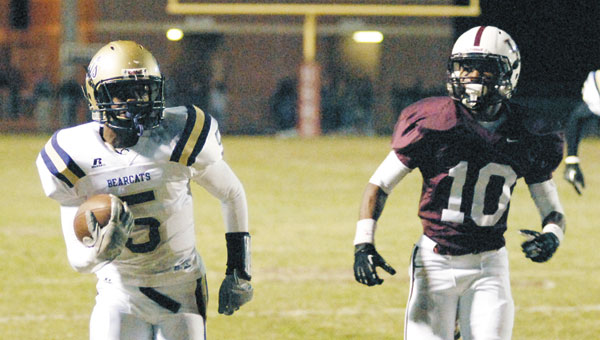 “I told our players after the game that we had a good season and I thought they played well, not only against Union Grove, but also throughout the rest of the season,” Pilcher said.
The Bearcats finished the regular season 7-3, and were 3-2 in Region 1-AAAAA play.

“We were hurt by a couple of penalties in our Friday night playoff game against Union Grove,” Pilcher said. “Early in the fourth quarter we were ahead 14-7 and we thought we had stopped one of Union Grove’s drives when they threw an incomplete pass on fourth down. An official came in and threw a flag for pass interference quite a few seconds after the play was over.

“We also were hurt by an illegal block call, which was a good call, that eliminated a long running back Terry Lewis run late in the fourth quarter. One of our linemen lined up in the slot and you can’t block when you are lined up there.”

Pilcher said he thought senior running back Derrick Craine, who scored all three Wolverines touchdowns, was the best running back the Bearcats have faced all season.

“He was not real fast, but he was strong and could break tackles,” Pilcher said.

The Bearcats had the ball first-and-goal at the Wolverines 8-yard-line with 24 seconds remaining in the game. On second down, quarterback Preston Norris threw a pass to wide receiver Greg Cooper near the end pylon, but the official ruled the ball hit the ground.

Pilcher said he was considering going for a two-point conversion, rather than kicking the extra point for a tie, if the Bearcats had scored on the last drive.