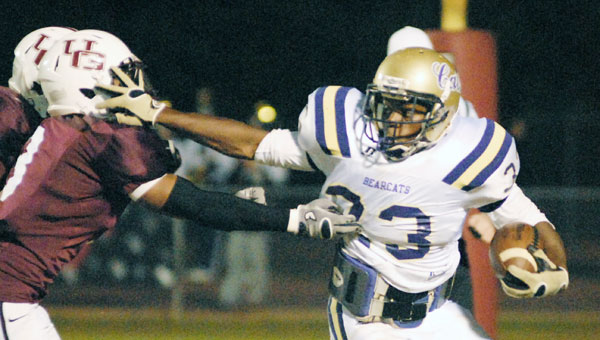 Bainbridge running back Terry Lewis tries to hold off a Union Grove tackle Friday night. The Bearcats came up just short in the Class AAAAA playoffs’ first round, falling by a 21-14 score.|Jeff Findley

McDONOUGH, Ga. — A cold Friday night under the stadium lights in McDonough left Bainbridge High School football fans broken-hearted, as a last-minute drive fell short and the Bearcats fell 21-14 to Union Grove High School in the first round of the State AAAAA playoffs.

It was the second-straight year that the Bearcats bowed out in the first round, and both times came by the same score — Bainbridge lost at Ware County, 21-14, in the first round of the 2011 Class AAAA playoffs.

Bainbridge (8-3) received the opening kickoff, but fumbled soon after.

The Wolverines (10-1) drove down the field, and with 5:50 left in the first quarter, running back Derrick Craine ran in for a touchdown from 17 yards out. Kicker Shawn Davis’ extra point made the score 7-0 in Union Grove’s favor.

Bainbridge punted on the ensuing drive, forcing the Wolverines to start their second drive from their own 11-yard line. Facing a third-and-12 deep in their own territory, Union Grove quarterback Jonathan Slade threw a pass that was intercepted by Bainbridge defensive back Cameron McDowell, who took it from the Union Grove 45 to the 10-yard line.

After an illegal procedure penalty, Damian Bouie ran 6 yards to the 8-yard line, then 3 yards to the 5, as the first quarter expired.

The Bearcats faced a fourth-and-1 to start the second quarter. McDowell kept it himself to the 1-yard line, and on the next play, pushed into the end zone. Daniel Provence’s extra point kick tied the game at 7-7, with 11:01 left in the second.

Union Grove’s Charles Valentine returned the kickoff 73 yards, from around his own goal line to the Bainbridge 27. Several plays later, with the ball on the Bainbridge 15, McDowell broke up what would have been a touchdown pass in the left corner of the endzone.

On the next play, the Bearcats appeared to have stopped a Union Grove rush for a loss, but offsetting penalties kept the ball at the 15. Slade had an incomplete pass, setting up a fourth down. Davis’ 32-yard field goal attempt was incomplete.

Neither team mounted much offense in the remainder of the first half, and at halftime the game was still tied, 7-7.

The Wolverines received the second-half kickoff and started from their own 20, but were eventually forced to punt.

On the following drive, McDowell broke free for a long run, from the Bainbridge 38 to the Union Grove 3. Lewis then did the rest, scoring on a short touchdown run. Provence’s extra point put Bainbridge ahead, 14-7, with 6:45 remaining in the third quarter.

The teams exchanged punts in their next two drives, with Union Grove taking over at its own 15.
On a second-and-5 from the Union Grove 20, Bainbridge’s Baulkman batted away Slade’s pass attempt. But the Wolverines’ Luke Parker still rushed for a first down to the Union Grove 34.

After an ensuing second down, a Wolverine player pushed a Bearcat player, starting a skirmish that was broken up by the referees. After the officials huddled together, they called a personal foul on each team, so the ball stayed at the Union Grove 36.

The Bearcats’ defense stymied the Wolverines, who went for it on a fourth-and-9 with 10:39 left in the fourth. Slade’s pass was broken up by Baulkman, but a penalty was called on the Bearcats, giving the Wolverines a first down from the Bainbridge 12.

Craine rushed for 8 yards to the 4, then took a Slade handoff around the left end for a touchdown with 9:11 left in the game. Davis’ extra point was short and wide right, so the Bearcats held a slim lead, 14-13.

B.J. Cheatem returned the ensuing kickoff to the Bainbridge 46. Lewis had a long run into Wolverine territory, but it was called back by a penalty, putting the ball on the Bainbridge 37.

On a third-and-15, Bainbridge fumbled the ball and the Wolverines recovered at the Bainbridge 36. Craine rushed for 10 yards to the 26. On the next play, Craine powered forward along the sideline for a touchdown, to make the score 19-14 with 6:54 left in the game.

The Wolverines appeared to line up to kick an extra point, but the ball was snapped to backup quarterback Eric Forrest, who completed a pass to Caleb Ham in the end zone for a two-point conversion, making the score 21-14.

The Bearcats returned the ensuing kickoff to their 20, but a penalty moved the ball back to the 15. On a third-and-9 from the Bainbridge 22, Preston Norris came in at quarterback but appeared to trip after taking the snap.

Soden’s subsequent punt was downed at the Union Grove 33, which began its drive with 4:30 left. The drive only advanced to the 40 and the Wolverines punted with 3:32 left, sending the ball to the Bainbridge 31.

Norris threw a short slant pass to Lewis, who rushed to the Bainbridge 48 with a little more than three minutes remaining. But two successive rushes by Lewis gained no ground, as the clock went under two minutes. Norris passed to McDowell, who went to the Union Grove 46. A penalty against the Wolverines moved the ball forward, with the Bearcats taking a first down on the 30.

With a little more than a minute remaining, Norris passed to Lewis at the line of scrimmage. Greg Cooper caught a pass from Norris at the Union Grove 8-yard-line, with 24 seconds left.

On first down, Norris threw an incomplete pass toward the sideline. Cooper appeared to catch a pass from Norris near the pylon, but it was ruled incomplete. On a third-and-goal from the 8, with 16.2 seconds left, Norris’ pass to McDowell in the end zone was incomplete.

On fourth down with 11.2 seconds left, Norris’ pass missed Cooper, giving the ball over to the Wolverines on downs with just 7.6 seconds left. One snap later and the game was over.