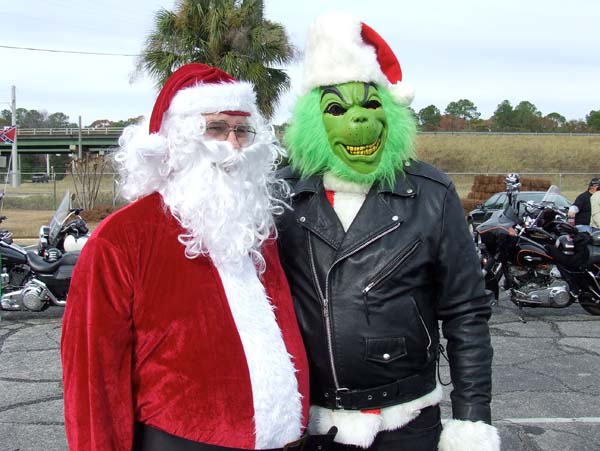 SANTA AND HIS FRIEND, THE GRINCH, led the parade of the Deep South Riders Toy Run on Saturday.

At least a hundred motorcycles, all bearing gifts, filled the Charter House Inn parking lot early Saturday afternoon, as members of the Deep South Riders and their friends gathered to start their annual toy run.

Roy Reynolds believes the local toy run has been an event of nearly 20 years and said this year the Deep South Riders were joined by the revitalized troop, Remaining Few of Bainbridge and Albany. The run also included cyclists from surrounding cities of  Cairo, Thomasville, Moultrie, Donalsonville and Tallahassee, Fla., among others.

DeWitt Phillips, another local cyclist, said he has been doing the toy runs about 13 years. He mentioned that many of the riders make the circuit, attending the runs in other towns on alternate weekends. “It’s just fun,” he explains.

Peanut Johnson, current president of the Deep South Riders and organizer of the event, attributed the good turnout to the perfect weather.

The cycles left the Charter House, taking the by-pass to Shotwell Street for a parade through town before accessing U.S. Highway 84 and U.S. Highway 27, and making their way to the Bikefest Grounds.

At the end of the run the toys were delivered to the waiting Salvation Army canteen and the riders were treated to lunch.

Gloria Harrell, director of the local Salvation Army Center, expressed gratitude to the Deep South Riders, who she said have been so faithful throughout the year giving support to the Salvation Army. She and Johnson also gave credit to the local merchants who have made donations of toys and door prizes for the riders.

Harrell explained that the parents of close to 500 families have come to their offices this year — a larger number than before — to be pre-qualified to receive toys and Christmas assistance.

Salvation Army personnel will distribute the toys next week to those families, so that the parents have the choice and ability to play the role of Santa to their children.