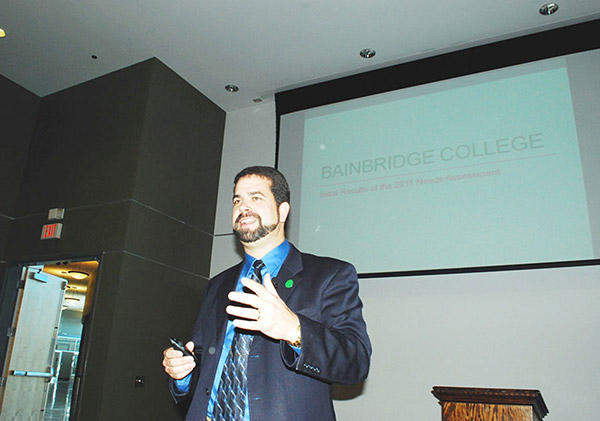 The long-burning question of whether there is a need for Bainbridge College to offer a baccalaureate (four-year or bachelor’s degree) program was recently answered, President Richard Carvajal announced to the college’s faculty and staff Thursday.
Carvajal said a recently completed needs assessment has answered the question that has been repeatedly raised for many years — is there a documentable need for greater access to baccalaureate degree programs in southwest Georgia?
The answer is clearly yes,” Carvajal said.
He told the BC faculty and staff that the needs assessment found that the percentage of persons 25 years of age or older in southwest Georgia who have completed a baccalaureate degree was less than half of the statewide average.
MGT of America, a national consulting firm based in Florida, was contracted by the college this past summer to conduct a comprehensive assessment of the need for potential four-year program expansion. As part of their work, they examined degree attainment rates for residents of the 11 Georgia counties that BC principally serves and compared them to statewide figures.
Regionally, the highest degree earned for 6.79 percent of area residents is an associate degree, compared with 6.40 percent statewide. Meanwhile, 17.54 percent of Georgians have earned bachelor’s degrees, while only 8.31 percent of adults in southwest Georgia have attained the same credential.
“Where Bainbridge College is able, we have met the need,” said Carvajal, pointing to the success BC has enjoyed in producing graduates in associate degree programs. “Where we are not able, the need has not been met for those who live in our region.”
MGT also found that the jobs that the area’s major employers will be adding in the next decade will increasingly demand training and credentials beyond the associate degree, and the shortfall of a properly trained workforce warrants quick attention.
“Shortfalls in educational attainment are starkly apparent for the Georgia segments of the service area,” MGT of America concluded, in its report to the college. “There exists a pronounced opportunity for expansion of educational services to fulfill this need.”
An examination of the college’s current and past students also suggests that four-year programs can be successful at Bainbridge College, Carvajal said. He noted that survey results have indicated that approximately two-thirds of BC students have the goal of ultimately pursuing a bachelor’s degree. In addition, he cited the success of the college’s multiple 2+2 bachelor’s degree programs, in which a student who completes an Associate of Arts degree at Bainbridge College can then complete a four-year degree through another institution on Bainbridge College’s campus.
What new program might be attempted, and how it will best serve the community’s citizens, businesses and industries, are the next questions that will be addressed with more study over of the course of the next four to six months, Carvajal said. Once that work is completed, the college can complete the necessary steps to apply to the state Board of Regents of the University System of Georgia for permission to offer a baccalaureate degree.
Carvajal noted that some faculty and staff members, as well as members of the region’s communities, have previously expressed concerns of how a four-year program would change the fabric of Bainbridge College with its unique blend of transfer and technical programs, but he said that the college remains committed to offering technical programs.
“I am 100 percent committed to keeping those programs intact,” Carvajal said. “We believe that we can remain the same comprehensive college that we have always been, offering both transfer and technical programs. This move simply allows us to become even more comprehensive by ensuring that those who wish to earn a baccalaureate degree will be able to do so closer to home.”
Since Carvajal’s arrival in January, the president has been engaging the college’s students, faculty and staff, as well as the area’s residents, businesses and industries, on what they see for the future of the college. When he was formally introduced to the community in March, Carvajal outlined Bainbridge College’s 2011-14 Strategic Plan. Of the goals outlined, one goal was to decide once and for all whether or not to expand Bainbridge College’s mission and offer four-year programs that are intended to meet community workforce needs. The recently completed “needs assessment” by a consulting firm from Florida was a step toward meeting that goal.