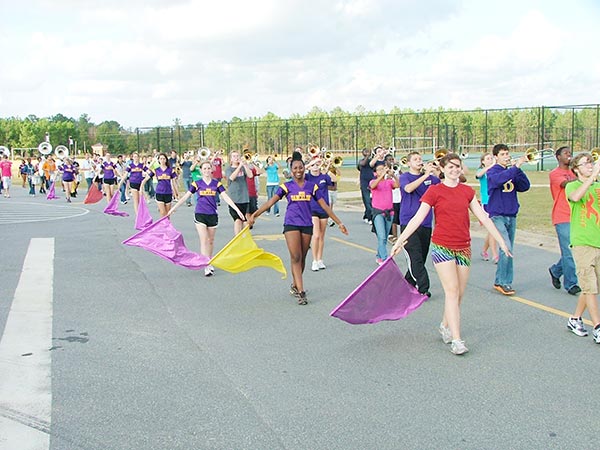 On Sunday, the award-winning Bainbridge High School Marching Bearcat Band will embark on their long-awaited journey to Washington, D.C., New York City and Philadelphia, Pa., where they have been invited to perform in the 6-ABC IKEA Dunkin Donuts Thanksgiving Day Parade.

This is the parade’s 92nd year and the Marching Bearcats were the only band in the state of Georgia that was asked to participate. Started in 1920, it is billed as the oldest Thanksgiving Day parade in the country.

‘This will be a great opportunity for our young musicians,” said Paschal Ward, director of bands for the Decatur County School System. “They will have the opportunity to spend a day in our nation’s capital, tour the Smithsonian and visit some of the many momuments in that city that represent so much of our nation’s history.

“Our band students have worked hard to prepare for this trip of a lifetime and they understand that there are no free trips, and certainly none of the value of this one.

“A special thanks goes to all the businesses and individuals that have supported our band program and made this trip a reality.”

They will leave from the Bainbridge High School campus Sunday at 4 a.m. and arrive in Washington, D.C., at 11 p,m. On Monday, they will visit the Lincoln Memorial and other monuments.

After lunch they will have an opportunity to shop at Macy’s, Saks Fifth Avenue and FAO Schwartz.

On Tuesday at 7 p.m., the band will be in the audience at the Majestic Theatre where they will view the Broadway hit, The Phantom of the Opera. On Wednesday at 11 a.m., they will view the Christmas Spectacular at Radio City Music Hall.

After lunch they will depart for Philadelphia, arriving at the city’s welcome center at 5 p.m.

From there they will visit the Liberty Bell, Independence Hall, and other historic buildings in the area. The parade will begin Thursday at 8:10 a.m. Local people who would like to see it can visit online at 6ABC.com.

After the parade, the band will depart for the Hyatt Dulles Hotel in Herndon, Va., where they will enjoy a traditional Thanksgiving dinner at 5 p.m. They will depart for their trip home to Bainbridge at 6:45 p.m. and arrive home Friday at 11:30 a.m.