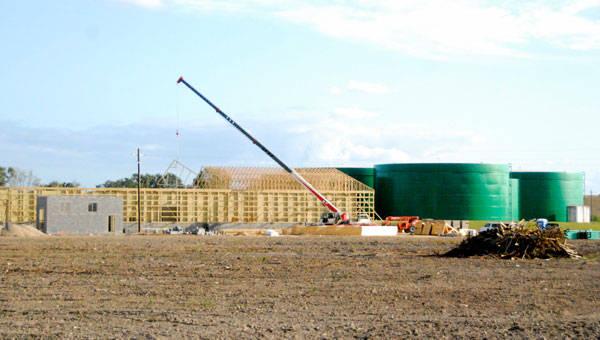 Work at the R.W. Griffin fertilizer facility is one example of the development of industry in Decatur County.|Brennan Leathers

Rick McCaskill, executive director of the Development Authority of Bainbridge and Decatur County, brought the Bainbridge Lions Club up to date on the current industrial outlook Wednesday.
He opened his remarks by pointing out that times have been tough for the past 10 or 15 years.
“Nationally unemployment is the highest it has been in quite a while.” McCaskill said. “We have two industrial parks. The problem is the economy is just gosh awful right now.
“Locally we do have a lot of good things going on at the R.W. Griffin liquid nitrogen fertilizer facility. If you go out Spring Creek Road you will see their new green tanks.
“Our development authority board members are chairman Dr. Jon McRae, vice chairman Keith Lyle, secretary treasurer George Floyd, Steve Bench, Jason Lee, Mike Conder, Joe Truhett, Marlon Breedlove and Ted Martin.”
McCaskill also updated the Lions on progress made on a proposed new state or federal prison coming to Decatur County.
“Corrections Corporation of America is planning to construct 85 prisons, six of which would be in Georgia,” he said. “Forty-two sites in Georgia were considered and later they were narrowed down to 12. Eventually two sites in our part of the state, Decatur County and Lowndes County, were chosen. The site would be on the back side of the industrial air park.
“We have filled in the land, but with the construction business like it is we have no idea when anything might progress. It usually takes 16 to 18 months to build a prison.”