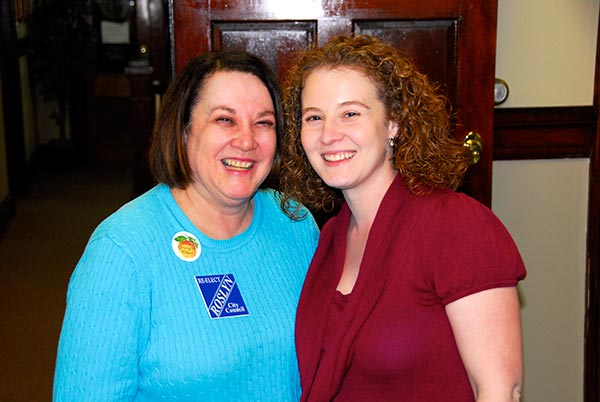 ELATED AFTER HER WIN in Tuesday’s municipal election, Bainbridge City Councilwoman Roslyn Palmer—who was first elected to the Council in 1987—celebrates with her daughter, Mycla.

Palmer had lost her most of her voice, likely due to lots of phone campaigning, but she celebrated the victory with her daughter, Mycla—who was a small child when her mother was first elected in 1987.

“I want to thank the people who turned out to vote,” Palmer said after learning of the final vote count. “I appreciate their support and look forward to serving the City of Bainbridge for another four years.”

Lamb, who runs a wooden pallet business but is also a minister, said he was proud to have run a clean campaign, something Palmer also acknowledged and thanked him for.

“I appreciate all the people who voted for me,” Lamb said. “This is just the beginning. I enjoyed doing it and plan to run again.”

In the only other contested race, for Brinson City Council Post 1, incumbent Franklin Faircloth defeated his opponent, Lamont Bullock. Faircloth had 40 votes, or 76.92 percent, to Bullock’s 12 votes, or 23.08 percent. Incumbent Brinson Mayor James Earp and Brinson Councilman Joe H. Belvin were both re-elected without opposition.

For the other two Bainbridge City Council posts that were on the ballot, long-time Councilman Luther Conyers and Councilman Dean Burke were both re-elected without opposition.

How did we get from ‘way back when’ to now?

I don’t think I would surprise anybody these days by making the statement that life in America is getting a... read more