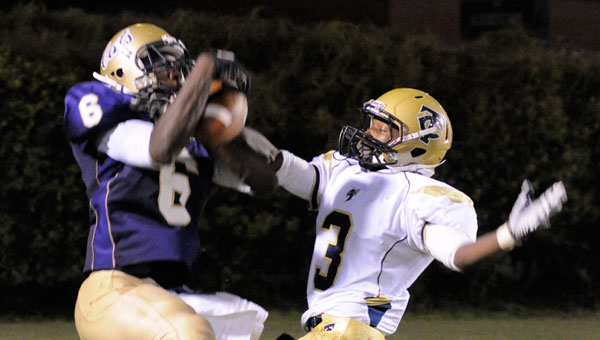 BAINBRIDGE'S RODNEY GLENN outjumps a Thomas County Central defender for the winning touchdown in overtime, in the Bearcats' 27-24 win over the Yellow Jackets Friday night.|Jeff Findley

By JUSTIN SCHUVER and JOE CRINE
Managing Editor and Sports Editor
Two seniors came up especially huge for the Bainbridge Bearcats on Senior Night, as they defeated visiting Thomas County Central, 27-24, in overtime.
Senior quarterback Quincy Fortson connected with senior defensive back/wide receiver Rodney Glenn on a fade route for a 14-yard touchdown run in overtime, after Bainbridge’s defense had held the Yellow Jackets to a field goal on their first overtime possession.
Although a false-start penalty had pushed Bainbridge back to a third-and-9 from the 14, the Bearcats did not appear phased. Fortson drew back a few steps and launched a long pass high into the air down the left sideline, and Glenn outjumped a Central defensive back and came down in the end zone to cap off a huge celebration.
“I knew I was in bounds when I caught it,” Glenn said. “I just wanted to be sure I held on to the ball.”
Fortson’s pass was his third touchdown of the game. The quarterback also had two rushing touchdowns and finished with 156 yards on 13 carries.
“I just knew I wanted to show up on Senior Night,” Fortson said. “We couldn’t have gotten this win without the play of our offensive line and wide receivers. Everyone got the job done.”
Bainbridge had broken out to a 21-0 lead with 4:37 remaining in the second quarter, but the Yellow Jackets came back with 21 unanswered points to send it into overtime.
The win improves Bainbridge’s record to 8-2 overall and 5-2 in Region 1-AAAA, as the Bearcats finished third in the region. They will travel to Waycross next Friday to face Ware County, the No. 2 seed in Region 2-AAAA, in the first round of the Class AAAA playoffs. The Gators are also 8-2.
“We really needed that win,” Bainbridge coach Ed Pilcher said. “It was a really hard-fought game. We were fortunate enough to make one more play than they did.”
In Central’s first possession of overtime, quarterback Adam Choice rushed for a 5-yard play on first down and quickly snapped the ball for another play. Running back James Davis tried to rush to the right side, but Bainbridge’s Devin Hubbard and Tarow Barney brought him down for a 4-yard loss and put the Yellow Jackets in a third-and-9 situation.
Choice’s third-down run netted only 1 yard, and Gavin Wilson kicked a 30-yard field goal to put Central ahead by three points.
“We were trying to change the play because we knew that we were running toward [Bainbridge’s] strong side,” Central coach Bill Shaver said, of the 4-yard loss. “But we didn’t make the right audible and we knew it was trouble as soon as we snapped the ball.”
Bainbridge opened its overtime possession with a pair of Damian Bouie runs that moved the Bearcats to a third-and-4 from the Central 9. A false-start penalty knocked the Bearcats back 5 yards, but one play later Fortson connected with Glenn for the winning score.
The Bearcats opened the game Friday night with a quick-strike offense. Greg Cooper returned the opening kickoff from the Bainbridge 13 to the Central 38, and one play later Fortson faked a dive handoff and broke away for a 62-yard touchdown run. Daniel Provence added the extra point to put Bainbridge ahead, 7-0, just 19 seconds into the game.
Bainbridge forced Central to turn the ball over on downs on the Yellow Jackets’ first possession, and the Bearcats took over on their own 35-yard-line. Terry Lewis rushed for 4 yards and 1 yard before Fortson broke away again for a long touchdown run of 60 yards. Fortson’s first two carries of the game netted 122 yards and two touchdowns.
After Provence’s extra point, the Bearcats led 14-0 with 5:02 left in the first quarter. They increased their lead in the second quarter, after George Clemmons blocked a Central punt on the Jackets’ 23-yard-line, and Dontavious Baulkman recovered it in the endzone for a touchdown. Provence’s extra point put Bainbridge ahead 21-0 with 6:44 remaining in the second quarter.
Bainbridge’s lead could have been even greater, but Provence missed field goals of 29 and 38 yards in the first half.
Central cut the Bearcats’ lead to 14 points when Choice scored on a 6-yard run and Wilson added the extra point with 4:37 left in the second quarter. Central’s second-half touchdowns came on a 1-yard run by Damian Williams with 3:21 left in the third quarter, and a 29-yard run by Choice with 6:17 left in the fourth quarter.
The Yellow Jackets made an effort to win the game late in regulation, when Choice connected with Davis for a 36-yard reception to the Bainbridge 42-yard-line with 14.7 seconds left and all three timeouts remaining. But the Bearcats’ defense held strong, as Choice was sacked by Barney for a 12-yard loss to stall out the drive.
Choice finished with 130 yards on 32 carries and two touchdowns. Lewis finished with 64 carries on 14 yards for Bainbridge, and broke 1,000 yards for the season.
The victory was the first for Pilcher over his former team. Pilcher had been 0-3 against Thomas County Central, a team he coached for 17 years, amassing five state titles and more than 150 wins. Central’s coach Shaver is Pilcher’s former offensive coordinator with the Jackets.
“It’s always nice to get a win,” Pilcher said. “But this game is always really hard for me to play. I still have a lot of friends over there [at Central], but it’s a game we have to play and it’s one that I’m happy we won.”
You Might Like