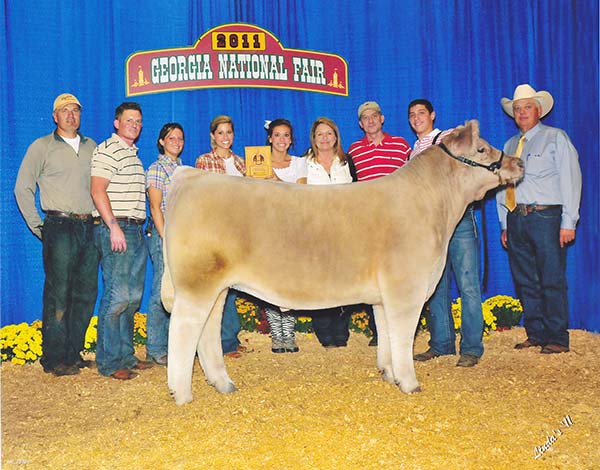 BO BAILEY and Judge Jim Williams, along with Bo’s family, are pictured with his third-overall-winning Charolais steer.

In addition, he exhibited a Chi-Influence steer entry that received first-place honors in his weight class. He was then named Reserve Champion Chi-Influence Steer.

Bo, a ninth grade 4-H’er at Grace Christian Academy, is the son of Dr. and Mrs. Cliff Bailey.

The Georgia National Fair Steer Show is composed of weight classes for each respected breed. Breed champions compete for the overall top five honors. Furthermore, students participate in showmanship in their designated grade. 4-H and FFA exhibitors in fourth grade through 12th grade from across the state of Georgia participate in the event. Jim Williams of Texas judged the steer show.

As a result of their participation in the Georgia youth livestock program, these youth gain character traits including responsibility, caring and fairness among others, and certainly the reward of hard-work and dedication. In addition, they practice numerous life skills including teamwork, self motivation, self esteem, critical thinking, decision making, goal setting, cooperation and communication.