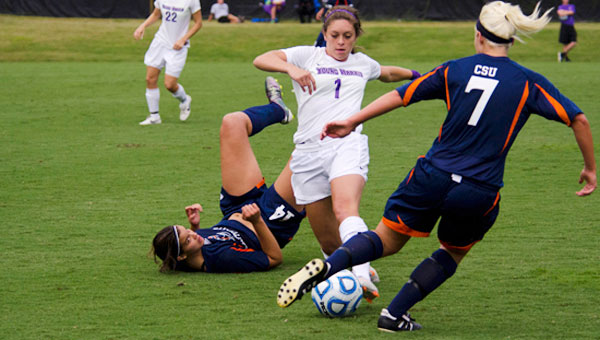 Forward Whitney Thomas, the all-time scoring leader for the Bainbridge High School girls’ soccer team, is continuing her strong play at Young Harris College.
In 30 games and 10 starts, Thomas, who had 61 goals and 29 assists under coach Chip Ariail at Bainbridge High School, has started 10 games, scored 4 goals, and had 3 assists and 25 shots on goal.
During a 5-3 Sunday, October 23 loss to the Thomas University Night Hawks she impressed her former Bainbridge High School Lady Cats coach Chip Ariail who attended the game.
“Whitney was an outstanding player for me at Bainbridge High School and she is continuing her strong play at Young Harris,” coach Ariail said.
“In a recent 2-0 victory over Southern Wesleyan College, she scored the winning goal in the 85th minute with an assist from teammate Lauren Martin.
As a freshman in 2010, Thomas also had an excellent season. She appeared in 16 games, started four games, finished with four points and took 16 shots including 10 on goal.
At Bainbridge High School, Thomas was All-Region 1AAAA and All-Area for three years.
The Mountain Lions return to action today at Tennessee Wesleyan College at 1 p.m. in Athens, Tenn.