Carvajal officially inaugurated at BC 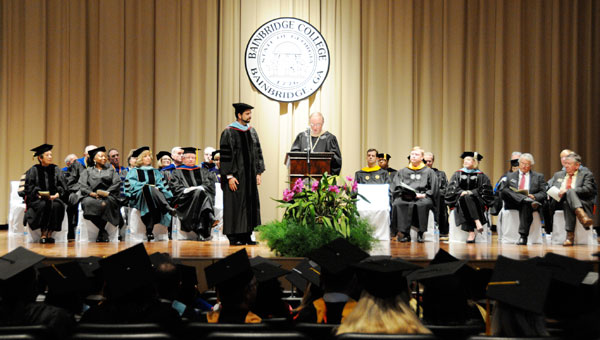 HANK HUCKABY, chancellor of the University System of Georgia, reads the investure during Bainbridge College President Dr. Richard Carvajal’s inauguration Friday. The investure “invests” the new president with serving as the leader of an institution.|Justin Schuver

In Bainbridge College president Dr. Richard Carvajal’s inaugural address delivered Friday, he told the faculty and community members present that “all things are possible” and that the institution should always strive to meet the needs of its community, even if there are obstacles in the way.
Although Carvajal began his tenure as the fourth president of Bainbridge College (BC) in January 2011, his official inauguration and installation was not held until Friday morning at the Kirbo Center. Among the dignitaries attending the ceremony and speaking during the morning were State Rep. Gene Maddox, State Sen. John Bulloch and Hank Huckaby, chancellor of the University System of Georgia.
Dr. Tonya Strickland, the vice president for academic affairs at BC, spoke glowingly of Carvajal’s accomplishments as she introduced the ceremony.
“It was love at first interview,” said Strickland, who served on the presidential search committee. “Dr. Carvajal has already made great progress and we know he will continue to lead our institution forward.”
Prior to Carvajal’s address, he was introduced by a former colleague. Dr. Gerald Williamson is the vice president for student services (emeritus) at East Central University in Ada, Okla., and was once Carvajal’s supervisor. Williamson said he once offered Carvajal the chance to succeed him, but Carvajal turned down the offer.
“What I didn’t realize was that my ‘professional son’ had bigger aspirations than his ‘professional father,’” Williamson said. “Richard wanted to be a president.”
Williamson also told a parable about a boy who was going along the shore and picking up starfish that had gotten beached and would die without water. He would throw the starfish back into the water one by one, but even more would later get beached.
“Eventually a passerby told the boy, ‘You’re wasting your time, you’ll never save them all,’” Williamson said. “But the boy replied, ‘I just saved that one.’ I’m asking you to work with Richard and give those ‘starfish of southwest Georgia’ the chance to make a difference in their lives.”
In Carvajal’s address, the president spoke calmly at first before building up to an almost preacher-like and commanding speech. He talked about challenges he had faced personally, including growing up in poverty, having to deal with bigotry, and a previous job — as chief student affairs officer — of helping turning around a drug-riddled and low-academic-profile community college into one of the fastest-growing community colleges in the nation.
“I believe the lessons learned from these stories can and will serve as a foundation for a future that all, who love Bainbridge College, can create together,” he said.
Carvajal quoted César Chávez, the son of migrant farm workers and a historical figure for social justice. Carvajal, whose father is of Mexican-American descent, noted that Chávez had a dream where people in the dream constantly told him, “no, no se puede,” which means, “these things are not possible.”
“In that dream, Chávez responded with a call that ultimately became a rallying cry for an entire movement,” he said. “’Sí, sí se puede,’ he called out. ‘Yes, together, all things are possible.’”
As Carvajal neared the end of his address, his tone became as if he were leading a pep rally.
“I see a future where Bainbridge College has built a robust student life program,” he said. “With a world-class, one-stop student enrollment center, outstanding recreational and educational programming, a leadership development program that will train the new generation of leaders for our communities, and a full complement of fine arts, lectures and intramural or competitive athletics that will add to the cultural fabric of our region.
“And when you hear those who will try to convince you and others that such things are not possible at a place like Bainbridge College, I ask that you join me in saying to them, ‘No, you are wrong. Because together, all things are possible here.’”
You Might Like

COUNTY EMS DIRECTOR BILL HOGAN expresses his concern Tuesday that the county must consider the needs of its employees, if... read more