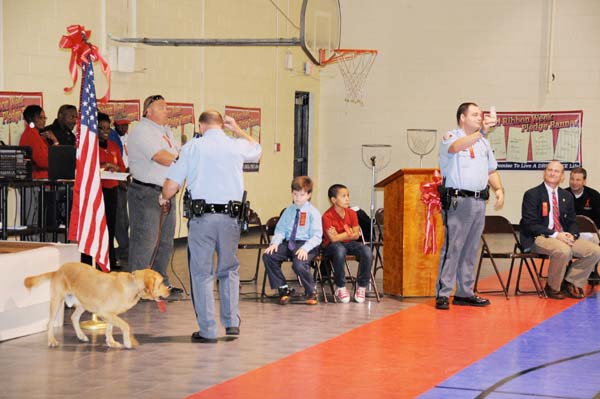 A Georgia State Patrol drug sniffing dog searched around the Potter Street Elementary gymnasium before finding a bag of marijuana that had been purposely hidden underneath the speaker’s podium.

Sgt. Chad Bennett of the Decatur County Sheriff’s Office told the kids that Red Ribbon Week began after the death of an undercover U.S. agent in Mexico, Enrique “Kiki” Camarena, who had been working to fight the illegal drug trafficking problem. Camarena was killed by drug cartel criminals in 1985, and Red Ribbon Week began when citizens in a California town began wearing red ribbons in his honor.

“Kiki put a lot of people who were selling drugs in jail in Mexico,” Bennett said. “He worked to make a difference. Just one person can make a difference. If you and all of your friends said ‘no’ to drugs, then we won’t have a drug problem [in the future].”

Trooper First Class Earl Prince of the Georgia State Patrol post in Colquitt, Ga., gave some tips on Halloween safety to the youngsters. He advised them to let their parents inspect any Halloween candy before eating it, and to make sure their costumes are safe.

“If you’re going to wear a mask, be sure it’s got some eye holes,” he said. “Don’t have a loose costume where you can accidentally trip and fall. Halloween is a lot of fun, but let’s be safe.”

Prince also helped lead a demonstration of one of the GPS drug dogs, “Trooper Jake,” who sniffed around the auditorium before finding a bag of marijuana that had been purposely hidden underneath the speaker’s podium.

“Jake’s a really special dog who can sniff out when people have something they shouldn’t have, like marijuana,” Prince said, as the kids cheered and applauded Jake’s skill.

While most of the speakers gave advice about why to avoid drugs and alcohol, several also talked about the consequences of using the dangerous substances.

“Unfortunately, people sometimes say ‘yes’ to drugs, and they get in trouble with the law,” said Special Agent Mike Walsingham of the Georgia Bureau of Investigation. “The consequences of drugs are really, really bad. I would not just say ‘no’ to drugs, but I’d also run away from them.”