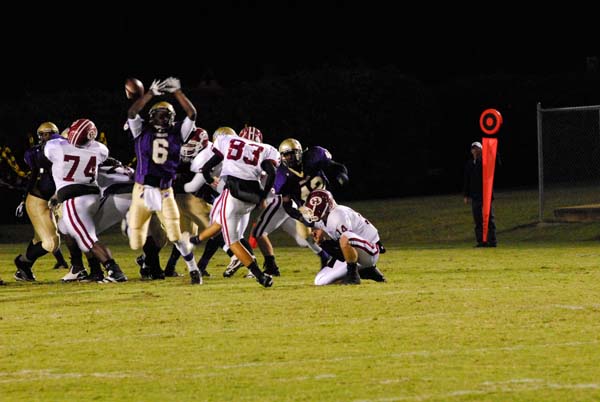 By JUSTIN SCHUVER and JOE CRINE

Warner Robins quarterback Ty Odom hit David Able for a 9-yard touchdown reception with 1:17 remaining in the fourth quarter, as the Demons held on for a 14-10 victory over the Bainbridge Bearcats at Centennial Field on Friday.

It was a heart-breaking loss for the Bearcats, who led 10-7 early in the quarter, after Quincy Fortson completed a 54-yard touchdown pass to Greg Cooper just 9 seconds into the fourth. Bainbridge (6-2, 3-2 in Region 1-AAAA) also led 3-0 early in a game that was a matchup of two of the most improved teams in Region 1-AAAA. The Demons were 2-8 in 2010 and Bainbridge was 3-7.

“We were ready to play this game and our kids played their tails off,” Bainbridge coach Ed Pilcher said. “We need to do a better job of tackling. We let their players break away for extra yards and you just can’t do that against good teams.”

Warner Robins (7-1, 5-1) came into Friday night with an offense that was averaging 29.4 points per game. But the Bearcats’ defense held strong all night long, as BHS’ Dontavious Baulkman and Rodney Glenn came up with interceptions. Glenn also forced a fumble and recovered the ball, and blocked a field goal.

“Our defense got gashed a little late in the first half, but we really played strong the rest of the way,” Pilcher said. “You have to give them credit for their call in the fourth quarter.”

The call Pilcher was referring to was a long screen pass that set up Warner Robins’ go-ahead touchdown. With approximately 2:00 left in the game and the Demons facing a second-and-8 from the Warner Robins 37-yard-line, Odom faded back and hit running back Damian Mercado out of the backfield for a short gain. Mercado did the rest, pulling away from Bainbridge defenders before finally being tackled at the Bearcats’ 9.

“That was the first screen pass they’d run in the last three games,” Pilcher said.

The Bearcats took advantage of a Warner Robins mistake to score the first points of the game. Bainbridge’s Paul Soden punted to Warner Robins’ Rod Harris, who muffed the catch and allowed Bainbridge linebacker Marshall Mack to fall on the live ball at the Demons’ 22. Four plays later, Daniel Provence kicked a 20-yard field goal to put the Bearcats ahead 3-0 with 7:43 left in the first quarter.

Warner Robins took its first lead of the game with 1:13 left in the second quarter. Fullback Michael Lee, on his only carry of the game, rumbled ahead for a 5-yard touchdown run at the end of a 14-play, 75-yard drive. All 14 plays in the drive were rushes.

Although Bainbridge came up short on the scoreboard, they still impressed Warner Robins coach Bryan Way.

“You boys played your behinds off,” Way said. “You’ll go a long way in the playoffs. You’ve got a great team.”

Bainbridge’s Terry Lewis led the Bearcats in rushing with 16 carries for 54 yards. Damian Bouie had nine carries for 46 yards and Fortson added 12 carries for 34 yards. Cooper had two catches for 83 yards.

The Bearcats travel to face Lee County next Friday at 7:30 p.m.