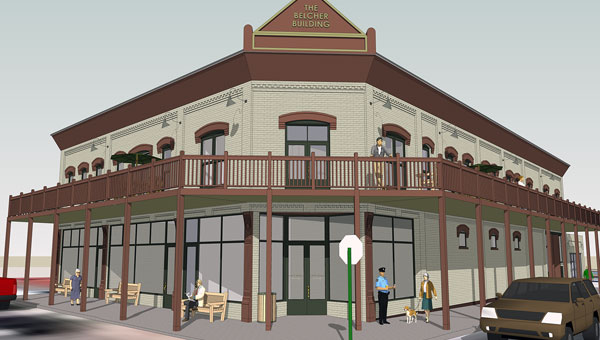 Rendering by Georgia Trust for Historic Preservation — This computer graphics rendering shows what the former Gowan Building at the corner of Water and Broad streets in downtown Bainbridge might look like after a renovation project.

It may not always be apparent, but downtown Bainbridge is constantly changing — taking inspiration from the past as it grows into the future.
One example of that fact is the building that housed the former Gowan Furniture and Allen Sports businesses, located at the corner of Broad and Water streets. Planning for future renovation of the building has uncovered some lost history, said Amanda Glover, director of the City of Bainbridge’s Community Development Division.
Built between 1898 and 1900, the Gowan Building was purchased by the Downtown Development Authority this past June after it became vacant.
If the City Council approves a major renovation of City Hall, located diagonally across Broad Street from the Gowan building, City Hall’s staff and functions will have to be moved out during an anticipated year-long construction period. The plan is to temporarily relocate City Hall into the lower floor of the Gowan building.
However, once the renovation of City Hall is complete, the DDA hopes to transform the building into a mixed-use, residential-and-retail space. The DDA could do some of the renovation itself, as it did on the Water Street project, or lease or sell the building to a third party. Although a non-historic metal slipcover façade has been removed, the full renovation of the Gowan building wouldn’t be done until the City Hall renovation was complete, Glover said.
Some of the discoveries being made about the building stem from design work being done by the Georgia Trust for Historic Preservation and funded by a grant from the Kirbo Foundation, Glover said.
Concept renderings of how the Gowan Building might look after its renovation show an upper-floor balcony where people might sit at tables and take a break. It also shows decorative brick columns underneath the balcony, both of which were known to be features of the original building.
The Gowan Building was known as the Park Hotel in the early 1920s. During the 1950s, an A & P Food Store occupied the space, and Sears Roebuck & Co. occupied the space of Allen Sports. However, the occupant of the building from 1900 to 1920 wasn’t known until a historic photograph of Bainbridge circa 1901 was found. The photograph revealed a feature of the original building that hadn’t been known: a brick pediment (roughly, a brick triangle sitting atop the upper corner of the building).
Closer examination of the photo revealed the words “The Belcher Building” on the pediment, Glover said. The Georgia Trust did some research and found some clues as to who “Belcher” may have been. There was an Abner Elias Belcher of Bainbridge who was born in 1866. There are references in historical documents to a Belcher Brothers who grew peaches, shipped goods and sold groceries. There was also a reference to “the Belcher block” of downtown Bainbridge and even a Belcher Street.
The removal of the metal slipcover façade uncovered more interesting history in the Gowan Building. As it turns out, the building’s original façade is partly comprised of cast iron columns bearing the inscription of the columns’ manufacturer, George L. Mesker and Co. of Evansville, Ind. However, the cornice — the trimming along the upper edge of the building — is made of steel. Although it is unmarked, the researchers believe it was made by Mesker Brothers Iron Works of St. Louis, Mo.
The two companies were operated by brothers from the same family and offered very similar building façade products — they were even rivals. Their products were used in so many buildings that there are Web sites devoted to cataloging now-historic attributes and appearance of buildings using “Mesker” components. The Gowan Building is special because a design expert believes it is only one of only 13 buildings identified thus far that uses components from both Mesker companies, Glover said.