Many take advantage of health fair 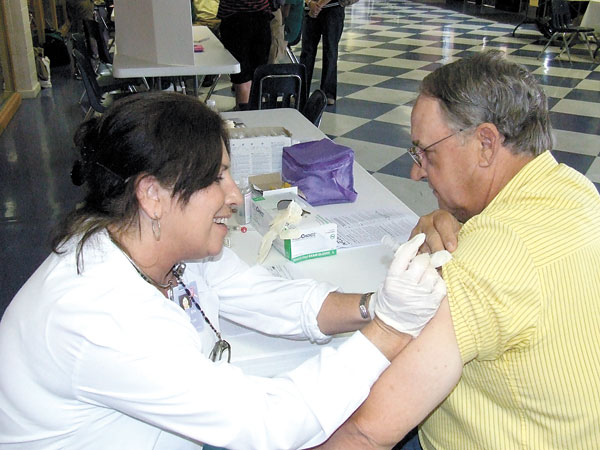 A PROPONENT OF preventive medicine is Jerry Sharber, who was receiving a flu shot from Jane Chesser, R.N. | Carolyn Iamon

A large number of people took advantage of the Memorial Hospital & Manor Community Health Fair, held Tuesday at Memorial Coliseum.
Some were there for the first time. Bonnie Provence was one of the “first-timers.” She said she had come because of an overall concern about her health. She had completed the blood work, blood-pressure check and vision test, and was just finishing the pulmonarytest, when she was interviewed. She said she was happy to be receiving good reports.
Another first-time attender was Calvin Kendrick, 50, who said he thought it was time — now that he was getting older — to start checking on his health.
As he was having his blood pressure checked, he indicated he has not had a family physician, but he is beginning to look for one.
Melba Cloud also attended for the first time. She said she was attracted to the event because she wanted to get the blood work done and was trying to save money on that procedure.
Jerry Sharber was found receiving a flu shot. He said he has been coming to the health fairs ever since they were started.
“It makes you notice things before they happen,” he said. “It is good preventive health maintenance.”
Jan Godwin, public relations director for the hospital, said Tuesday’s event was well attended. This was the first time it has been held in the coliseum, and she thought things moved along more quickly there. She estimated the longest wait time experienced was 90 minutes, while in prior years it had been in excess of two hours.
The coliseum was available this year because school was not in session, due to a teachers’ planning day. Godwin said this location was more suitable for a large crowd, and meets the major requirement of having adequate parking.
You Might Like

The Decatur County Board of Commissioners learned Tuesday that needed upgrades and improvements at the Airport Industrial Park’s water and... read more