County says ‘no’ to Humane Society 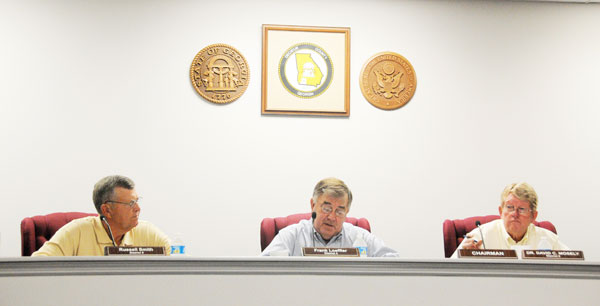 The Decatur County Board of Commissioners failed Tuesday to approve the Bainbridge-Decatur County Humane Society’s recent request for additional funding.
Earlier this year, the Humane Society asked for the county to pay $60,000 a year to help upkeep the Humane Society’s animal shelter, which is used to house animals collected by the county’s animal control officers. The county, instead, budgeted $40,000 a year, leading to the Humane Society’s request for additional funding.
At Tuesday’s board meeting, Commissioner Frank Loeffler made a motion that the county should pay a flat rate of $50,000 per year, plus additional prison inmate labor worth approximately $10,000. The motion ultimately failed by a 3-3 vote — Loeffler, Commissioner Russell Smith and Board Chairman Dr. David C. “Butch” Mosely voted in favor of the motion, while Commissioner Oliver Sellers, Commissioner Dr. Earl Perry and Board Vice Chairman Dr. C. T. Stafford voted against it.
After the meeting, Chuck Smith, president of the Bainbridge-Decatur County Humane Society, expressed his disappointment with the county’s action.
“We were very disappointed, because we have a service we provide to the citizens of this county,” he said. “We feel that the county should help pay for that service. We’re getting tired of spending all of our fundraising monies for operational costs.”
Because neither the City of Bainbridge nor the Decatur County Board of Commissioners operates a shelter, both government entities contract with the Humane Society to house animals that are collected by animal control officers. The Humane Society’s contract with the city is for a flat rate of $80,000 per year, while the county has paid on a per-animal basis (approximately $15 per animal-per day, plus other expenses).
“We feel like the city pays its fair share,” Smith said. “If you look at the population between the city and the rest of the county, it’s almost even. So, why should the county pay so much less than what the city pays?”
After Loeffler made his motion, the board discussed the issue, with several commissioners voicing their objections to the request.
“I think we all realize that what has been proposed to us is not in the best interest of this county’s taxpayers,” Stafford said.
Perry said he had a problem with giving additional funding to the Humane Society when other county departments are also underfunded. He noted that the public works department currently has three vacant positions, and that the county’s program to assist GED students only gets $35,000 a year.
“I cannot see granting only $35,000 to our students who are trying to get their GEDs, and giving $50,000 or $60,000 to animal control,” he said.
Perry said that the county paid a little more than $24,000 to the Humane Society, from August 2010 through July 2011. Earlier this year, the Humane Society’s past president Pam Immendorf said the county paid approximately $50,000 last year, under the per-animal contract.
Perry and Stafford also argued that the Humane Society’s proposed contract included a projected collection number of no more than 600 animals per year, but the actual number impounded per year has been closer to 350.
“To me, the $40,000, $50,000 and $60,000 (requests) are all out of line,” he said.
Loeffler responded that the request also included costs for overhead.
“They have a fixed cost whether there’s 600 animals or whether there’s no animals,” he said. “There’s a certain cost just to keep the doors open.”
Later Tuesday, Smith argued that the 350 animal number was not completely accurate.
“A lot of times a citizen from the county — and not necessarily an animal-control officer — will just drop off an animal,” he said. “We don’t get any money for those animals. There have been times when we’ve come in to work in the morning, and there will be a box of six puppies sitting on our door step. We don’t get any funding for those animals, either.”
He said the Humane Society would have been a little disappointed had the motion passed, since it was still less than the group’s initial $60,000-a-year request.
“We wouldn’t have been happy, but we would have accepted it,” he said. “As the president of the board of directors, I’m sure I could have swayed them to accept the $50,000 contract. We wouldn’t have been happy, but we’d have been a lot less disappointed.”
Smith explained that the Humane Society’s board of directors planned to meet Tuesday evening to discuss what its next move would be.
“The county doesn’t pay its fair share,” he said.