An inspiration to many 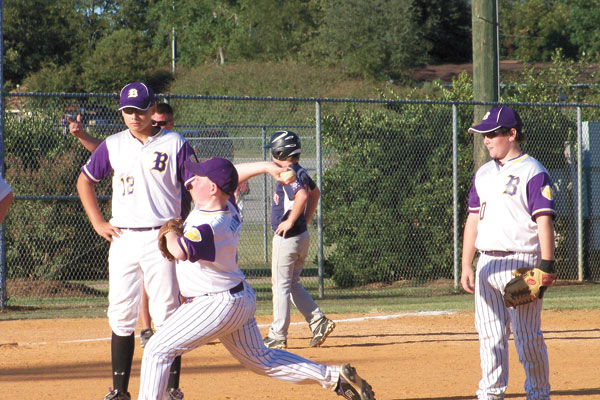 T.J. Andrews warms up to pitch in the Leesburg tournament on Saturday, Sept. 24. Also shown are teammates Conner Strickland and Will Kelley. | Submitted

By JOE CRINE
Sports Editor
Eleven-year-old Hutto Middle School sixth grader Toby Jordan (T.J.) Andrews has become an inspiration to many, since losing his left hand in an April 1 accident.
An avid baseball player and fan, he is now playing for coach Stacy Strickland’s Bainbridge Bearcats travel ball team.
Following the accident, T.J. was rushed to Tampa General Hospital in Tampa, Fla.
While in Tampa, the former Tracy Long of Bainbridge, one of his mother Toka Andrews’s friends, came to visit T.J. in the hospital with her husband, Phillip King. The Kings live in Lake Alfred, Fla., near Tampa.
Tracy’s husband Phillip was from St. Amant, La., the home town of Tampa Bay Rays shortstop Reid Brignac.
“Tracy and her husband were so nice to us,” Toka Andrews said. Phillip got on Facebook and contacted the people back in St. Avant, La., related T.J.’s story and asked if anyone knew how to get in touch with Reid. He heard from Reid’s father, who got him in touch with us.
“Reid and Rays third baseman Evan Longoria came to visit us at the hospital on consecutive days. After one of the regular season games that we attended as their guest, they were preparing to get on a bus, go to the airport and fly to Canada for series with the Toronto Blue Jays.
“The bus had to wait for Reid, who was talking to and encouraging T.J. after the game.”
During the Rays’ recent American League playoff series with the Texas Rangers, Brignac and Longoria texted T.J. during the game.
Former Bainbridge High School Bearcats and Valdosta State University Blazers pitcher Jeremy Coram devised a string to place on T.J.’s glove, to keep it steady while he transfers his right hand to it after throwing the pitch. When batting, he uses a prosthetic glove on his left hand.
Coram devised the string after watching the movie Soul Surfer, which was about a girl who lost her arm in a shark attack. She tied a string to the surf board to keep it steady.
T.J. threw out the ceremonial first pitches at a city of Bainbridge Invitational Tournament in his honor and a Bainbridge High School Bearcats invitational Tournament.
His travel team coach Stacy Strickland and long time Bainbridge Leisure Services Department director Al Kelley agree that if all the players worked as hard as T.J., Bainbridge would have many outstanding athletes.
T.J.’s doctor at Tampa General was also on staff at Tampa’s Shriners Crippled Childrens Hospital, and T.J. has been asked to be the ambassador for Shriners Hospitals.
You Might Like

Bearcats run away to 30-7 victory