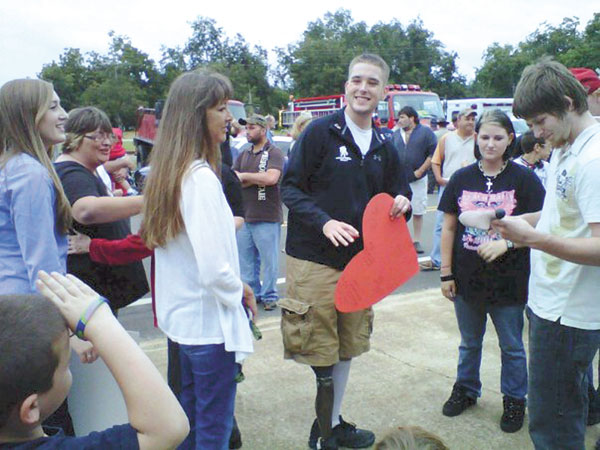 U.S. ARMY PRIVATE FIRST CLASS IAN EDGE, who was injured while serving in Afghanistan, was welcomed home Sunday in Brinson, by family and friends. Edge is the son of Brinson Mayor Jimmy Earp and his wife, Cheri. | Submitted

An escort of Georgia State patrol cars, a fire truck, an ambulance and numerous motorcycles and cars brought Ian Edge, a local soldier injured in Afghanistan in June, back to Brinson on Sunday.
U.S. Army Pvt. First Class Ian Edge, the son of Brinson Mayor Jimmy Earp and his wife Cheri, was wounded while serving in Afghanistan when he stepped on an improvised explosive device (IED). His right leg had to be amputated below the knee and he now wears an advanced prosthetic leg that helps him walk. He also lost two fingers on his left hand.
Children waiting for Edge to arrive at the Brinson Volunteer Fire Station held up signs that said “We Love You XOXO,” “Welcome Home!” and “You are My Hero.”
The Deep South Riders, a group of local motorcycle enthusiasts, met the vehicles taking Edge home at the Florida state line and led him back to Brinson.
Edge and his wife, the former Mary Beth Clendinen, will be in Brinson for just a couple of days before returning back to continue Ian’s physical therapy, but the couple is looking forward to spending more time with friends and family soon.
In the days following his injury, Ian was first transported to a U.S. Army hospital in Germany. He arrived at Walter Reed Army Medical Center in Washington, D.C. on Tuesday, July 5. He was transferred to outpatient status on Aug. 25 and is now living next to the hospital where he is continuing his recovery.
Anyone who would like to send Ian a get-well-soon message can write him at: PFC Ian Edge, c/o Warrior Transition Battalion, Box 30047, 8901 Wisconsin Avenue, Bethesda, MD 20889
Edge is married to the former Mary Beth Clendinen; both are graduates of Bainbridge High School.
You Might Like

The Bainbridge team of Brad Reynolds and Lance Reynolds caught 44 pounds, 8 ounces, of bass Saturday and Sunday to... read more