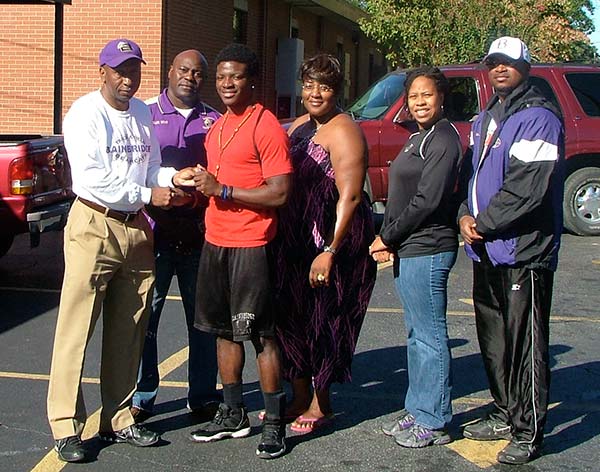 Prior to the presentaions, the coaches all praised Martistee for his dedication and strong work ethic.

Clark said Martistee, who played defensive back on coach Ed Pilcher’s Bearcats football team is majoring in sports management at Troy. While Martistee is relatively short at 5 feet, 8 inches, Clark said he was a great competitor all four of his high school years.

”You could always count on Delonte to get points for us in all of the jumping events,” Clark said. “He was also a big part of coach Cosby’s state Class AAAA championship team in 2010.”

Cosby said Martistee was very disciplined and one of his team leaders.

“Delonte kept himself in great shape and worked hard every day,” Cosby said. “He is now preparing for something that is very new for him, the college indoor track season. With his strong conditional efforts, I am sure he will do very well.”

Smith said Martistee stayed in condition by running and was a team leader on and off the track.

Each day at Troy, he is in the weight room at 5:30 a.m. to take part in a workout before going to class.

Phillips said Martistee is a strong performer on the track and an all around great young man.