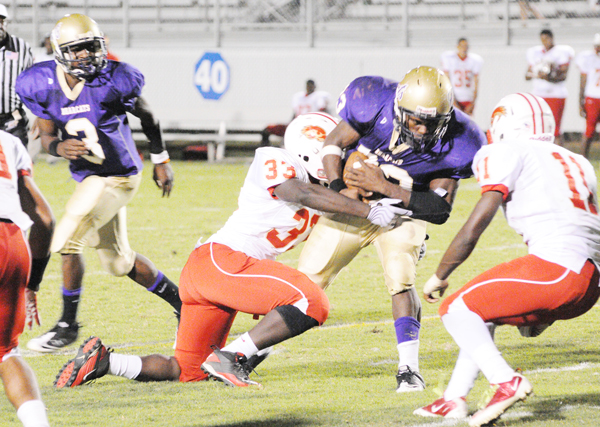 BAINBRIDGE RUNNING BACK Terry Lewis tries to break the tackle of Hardaway’s Joel Castro in the Bearcats’ 35-0 win over the Hawks Friday night. Lewis finished with 22 carries for 149 yards and two touchdowns. Quarterback Quincy Fortson (3) also had a touchdown run. | Jeff Findley

By JUSTIN SCHUVER and JOE CRINE
Managing Editor and Sports Editor
Bainbridge used a familiar formula to earn its first Region 1-AAAA win of the season Friday night — run the ball, run the ball and then run the ball some more.
Junior running backs Terry Lewis and Damian Bouie each had two rushing touchdowns, and senior quarterback Quincy Fortson added a touchdown run of his own as the Bearcats defeated Hardaway, 35-0, Friday night at Centennial Field.
“Offensively we were sharper tonight than we’ve been just about all year,” said Bainbridge coach Ed Pilcher, whose team also earned its first shutout of the season. “The defense played outstanding tonight as well.”
It was Bainbridge’s first shutout since the 2007 season, when the Bearcats shut out Dothan (Ala.) 49-0.
Bainbridge (4-1, 1-1 in Region 1-AAAA) took advantage of two early interceptions and rushed out to a quick 21-0 lead with 10:59 left in the second quarter. The Bearcats opened the second half with a methodical 16-play, 56-yard scoring drive that lasted 9 minutes, 8 seconds. Bouie ended the drive with a 7-yard run and Daniel Provence, who was 5-for-5 on extra points, added the kick to put Bainbridge ahead 28-0.
“That drive to open the second half was huge for our guys,” Pilcher said. “It helped us eat some clock and we were able to wear them down a bit with the run.”
The Bearcats were able to rebound from last Saturday’s 31-0 loss at Northside-Warner Robins, as Bainbridge evened its region record at 1-1.
“It was important to bounce back and pick up a win tonight,” Pilcher said.
Bainbridge’s next game is Friday, Oct. 8, against Northside-Columbus at 7:30 p.m. at Centennial Field.
Bainbridge’s first scoring drive against the Hardaway Hawks was set up by Rodney Glenn’s interception at the Hardaway 40-yard-line. Three plays later, Lewis followed the block of Bernard Burke to the left side and broke away for a 34-yard touchdown run with 9:32 remaining. Lewis led the Bearcats with 22 carries for 149 yards and two touchdowns.
The Bearcats drove down to the Hardaway 25-yard-line on their next drive, before fumbling it away. Bainbridge later got the ball back with excellent field position when defensive lineman Shammai Wilburn read a screen pass and intercepted the ball. Two plays earlier, Wilburn had dropped another potential interception.
“I knew I would hang on if I got a second chance at it,” Wilburn laughed. “I saw their guard going out slow and I thought it was a screen pass, so I just tried to get in front of the back.”
Lewis scored on a 17-yard run three plays later, and Provence’s extra point put Bainbridge ahead 14-0 with 18.9 seconds left in the first. Bainbridge’s Tarow Barney recovered a fumbled pitch on Hardaway’s next drive, and Fortson rushed for a 10-yard touchdown run two plays later.
Bainbridge’s last score of the night was a 5-yard touchdown run by Bouie with 3:50 remaining in the game. Bouie finished the game with 15 carries for 72 yards, and Fortson had 11 carries for 55 yards. Fortson attempted one pass, which was intercepted.