Daniels have kept the oaks alive 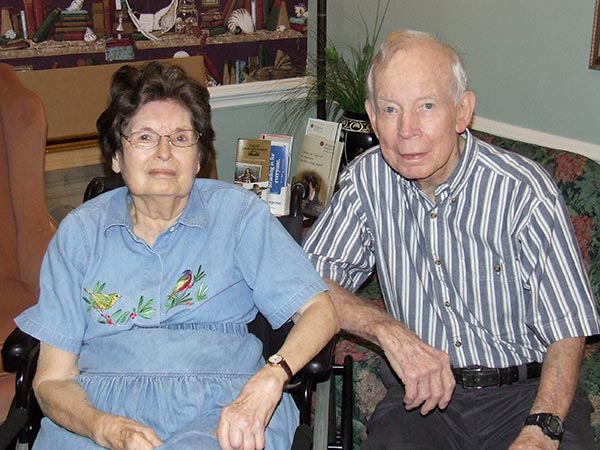 George and Carolyn Daniel have been loyal supporters and workers for many worthwhile projects in the City of Bainbridge since December 1956, when they decided to make Bainbridge their home.

Actually, George served on the Bainbridge City Council for 28 years, from 1973 to December 2001, and it was during his fifth term in office that he and his wife Carolyn waged their battle to pass an ordinance to save the city’s live oak trees.

The Daniels could see construction projects occurring that were clearing and destroying the beautiful old oaks that had long been hallmarks of the City. Bainbridge had long been known as “The Oak City,” yet many of the stately trees were disappearing.

They began researching ordinances from other cities, with Carolyn actually writing the one that was enacted by Bainbridge City Council in 1990.

Certain criteria was established in order for an oak to be determined a “Landmark Tree.” It had to have a certain circumference and diameter and be located at a certain area of the property. The first tree committee had about eight people on it, including Vera Custer and Lynda Todaro, who are still actively involved in that work. Another key person recalled by the Daniels was Liz Widener, who headed up the landmark tree project, located all the trees and had them identified.

The Daniels are quick to point out that the passing and enforcing of the ordinance was a very controversial subject when first introduced — one that met with much resistance from property owners.

“We were fussed at a lot at first,” George said. “We didn’t have a lot of support. Many people had the attitude, ‘That’s my tree. You can’t tell me what I can do with it.’”

He thinks now that most people are proud of what has been done to preserve the trees.

The Tree Commission not only works to preserve trees, but also plants new trees, especially on Arbor Day and at dedication ceremonies of memorial trees in public places.

Daniel attributes the hard work of the commission to Bainbridge receiving a “Tree City USA” designation from The Arbor Day Foundation.

The first tree chosen to be designated as a Landmark Tree was the one in Willis Park close to the Gazebo, facing West Street. It was selected because it was in the center of town.

Under a revised plan passed by the city in July, trees can now be named to honor individuals. Landmark Tree No. 1 will be renamed in honor of The George E. Daniel Family in a dedication ceremony to be held in Willis Park on Tuesday, Sept. 27 at 2 p.m.

Background on the Daniels

George spent his early years in Montgomery, Ala. His father, an accountant, died when George was 13. The family then moved to Macon, Ga., to his maternal grandparents’ home. His mother found a job as assistant manager of a furniture company. While he was a high school student, George also began working as a bookkeeper with that same company. He went on to graduate with honors from Lanier High School for Boys.

George is a World War II veteran, drafted into the Army in 1944 at age 18. He served in the infantry in the Philippine Islands, landing in Leyte in January 1945. He was involved in the initial invasion of Cebu Island. His unit was scheduled to act as a diversionary unit in the invasion of Japan, with an expectation of 75 percent fatalities. All of that changed with the dropping of the atom bombs.

After the war, he stayed in Japan for one year and was discharged in September 1946. He enrolled at the University of Georgia, graduating in June 1949, and went to work for the Internal Revenue Service. While at UGA, he was in the Air Force Reserve Officer Training Corps (ROTC). He was recalled when the Korean War broke out, and served in Japan for three months.

George first came to Bainbridge in 1957 and joined Wesley W. Cattledge to form the firm of Cattledge & Daniel CPA. In 1961, he went out on his own as George E. Daniel, CPA.

Carolyn Clay Daniel was originally from the small community of Desoto in Lee County, Ga. She and George met while he was auditing the books at Miller County Hospital, where she was a medical technologist in the early 1970s. They married July 10, 1976, and have continued to work together on civic affairs throughout the years.

In addition to being on the Bainbridge City Council, George has served as treasurer of the Chamber of Commerce, was District Governor of the Lions Club.

In addition, George and Carolyn are one of only two couples who have both chaired the Bainbridge College Foundation. (Jack and Joyce Leverette are the other). George was good friends with Charles Kirbo and worked with him to get the land donated for the building now known as the Charles H. Kirbo Regional Center at Bainbridge College. George was chairman of the foundation when the Kirbo building was begun, and said he and Jim Stone spearheaded the drive to get the building named after Kirbo.

Another accomplishment that was hard fought by Daniel, while on city council, was getting the Rapid Rail curbside garbage/trash pickup truck system for the city. He said he and fellow council member Dick Ivey spearheaded it. Ivey recalls that it took three votes to get it passed, but that when George put the figures together showing the big labor cost savings, it went through.

“It really was by far the best thing to do,” said Ivey.

Supporters of the arts

The Daniels have always been supporters of the arts and cultural events for Bainbridge. Carolyn has served on the board of Bainbridge Little Theatre as well as the former ArtsFest, and was a charter member of the Bainbridge/Decatur CountyArts Council, where she served as a director. Both were actively involved with the Wind Symphony’s original appearance and enjoyed hosting some of the musicians in their home.

Music has always been a strong interest of George, who began piano lessons early in life, and sang in the University of Georgia Men’s Glee Club while a student there. He also has led the singing and sung solos at First Baptist Church, where he is a member and has served as chairman of the church’s deacons. He also served nine years on the board of the Tallahassee Symphony Orchestra.

Both are members of the Decatur County Historical Society. Carolyn is credited with writing the descriptive information for each of the homes on the historic tour of homes.

The couple has two sons, George Edward Daniel Jr., of Bainbridge — referred to by all as “Dan” — who has an insurance agency in Bainbridge, and Michael Page Daniel, M.D., a urologist, living in Burlington, N.C. There are five grandchildren and two great-granddaughters.

George praises Carolyn, saying, “She has been my support and partner all along.” In fact, the two are rarely seen apart. They are now residents at the Willow Ridge assisted living facility, but continue to get out and attend the many events that interest them.

The public is invited to attend the brief dedication ceremony to be held in Willis Park on Tuesday, Sept. 27, at 2 p.m., in recognition of the Daniel family.