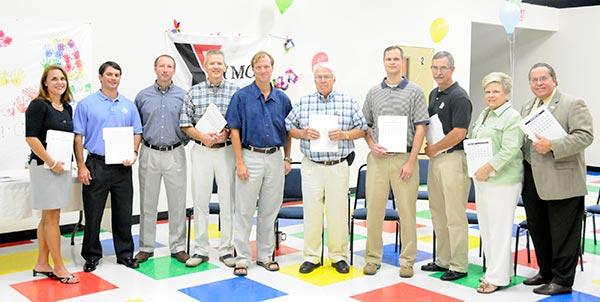 Mike Haynes, interim CEO of the Bainbridge-Decatur County YMCA, said it didn’t take him long to realize how blessed Decatur County citizens are.

“Most towns of your size don’t have a facility like this,” said Haynes, who has previously managed other YMCAs in Kentucky and Georgia, and began work in Bainbridge on Thursday, Sept. 1. “This community really has a lot going for it.”

On Tuesday, Haynes and the Board of Directors for the YMCA kicked off their annual fundraising campaign, with a goal of helping raise funds to stabilize facility operations. The plan coincides with the 25th anniversary of the opening of the local YMCA.

Board members, past and present, along with supporters and friends, joined together Tuesday to begin the “5 in 5” campaign. Donors are being asked to make a five-year pledge of $1,000 or more, which is enough to subsidize operations at the YMCA for a single week out of the year, Haynes said.

Haynes said the YMCA works as a non-profit organization to provide youth development, healthy living and social responsibility activities for the community. Although YMCAs charge membership fees and other customer-paid costs, they typically have annual fundraising campaigns to help pay for the extra expenses.

“You’ll be basically sponsoring to help the Y keep its doors open for that one week out of the year,” Haynes said. “Most YMCA’s across the country have a campaign like this every year. One big problem is that we haven’t had one here [in Bainbridge] in a long time.”

Although the goal for the campaign is a pledge of $5,000 over five years, Haynes said that any donations are always welcome.

For more information about the YMCA and its programs, or how to donate, call (229) 243-0508 or visit the facility at 1818 E. Shotwell St. in Bainbridge. Its web site is www.bainbridgeymca.org