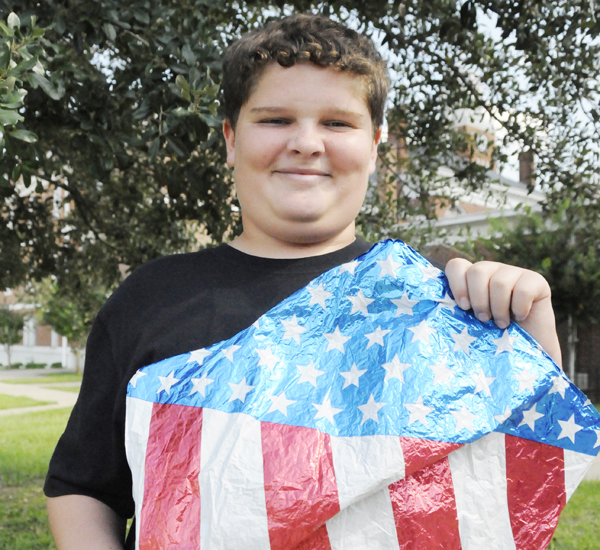 Tyler Allen, 13, shows off the balloon that he discovered on Sunday, Sept. 11. The card attached to the balloon stated it had been released from Indiana in memory of a soldier who died while fighting in Iraq.|Justin Schuver

By JUSTIN SCHUVER
Managing Editor
A 13-year-old Brinson boy received a special card Sunday, but it didn’t come by mailbox or computer — it came by balloon.
Tyler Allen, the son of Zane and Kim Allen, was visiting his grandfather Sunday when he discovered a deflated balloon that was stuck to a post. When he inspected the balloon, he found a card attached to the string, showing a picture of a deceased U.S. soldier — Sgt. James Daniel Faulkner — and information about his military life, as well as a website.
After Tyler visited the website, he learned that the balloon had been released from New Albany, Ind., a town more than 618 miles away, on Saturday, Sept. 5. Each year, the soldier’s family members release approximately 30 mylar balloons, along with their attached cards, from Kraft-Graceland Memorial Park in New Albany, Ind.
“My grandpa had asked me to go outside and do a headcount of his goats for him,” Tyler said. “At first I was just going to throw the balloon away, but then I noticed the card and I thought it was pretty cool. I thought it was extra special to find it on Sept. 11, because of the significance of that day.”
Tyler sent an email to Faulkner’s parents, Greg and Pam Gilkey, shortly after finding the balloon Sunday. They responded back Monday afternoon.
“Daniel would have been amazed at how far that (balloon) traveled,” they wrote in the e-mail. “How fitting that you found it on Sept. 11 as well. This is a special day in our American history, ranking right up there with Pearl Harbor.”
According to the website, www.ourhometownhero.com, most of the balloons that have been discovered were found in the nearby states of Kentucky, Ohio, or Indiana. Tyler’s balloon appears to have traveled nearly the longest, along with a balloon that was discovered in Altha, Fla. One balloon was found in 2006 in the city of Bainbridge, but it was Bainbridge, Ohio.
According to the card on Tyler’s balloon, Faulkner was killed in Iraq on Sept. 8, 2004, while fighting in Operation Iraqi Freedom. He was 23 years old.
“I sent (Faulkner’s parents) an email picture of the balloon and where I found it,” Tyler said. “I’m thinking about putting it in a frame and preserving it. I’m sure a lot of people find the balloons and don’t bother to respond, so I wanted to make sure that I did.”
Tyler also has another unique connection to 9/11. His mother, Kim, said the family took a trip to New York City in July 2001, two months to the day before the tragedy occurred. The family still has a photo of Kim holding Tyler while they stand on a bridge with the Twin Towers in the background.
“I’m a little too young to remember that trip,” Tyler said.
When asked what his grandparents thought of Tyler’s balloon, he just laughed.
“Grandpa told me, ‘Tyler I told you to count goats, not find balloons!,’” Tyler said. “But I know he thought it was pretty cool, too.”

By BRENNAN LEATHERS News Writer An employee of the Pizza Hut on Shotwell Street reported being robbed by a man... read more